The Democratic Party has utterly botch their big impeachment moment. In what was supposed to be their ultimate secret weapon against President Trump, they not only lost the argument against the President, but they themselves directly contributed to the downfall of their own narrative.

First, it was the degree to which they continuously shifted the rhetorical goalposts; from a “quid pro quo” to “witness intimidation” to “bribery,” they could not make up their minds about what President Trump supposedly did wrong and America noticed.

Then, their was the massive failure of their own “star witnesses.” From Vindman to Sondland to Yovanovitch to Hill, The Republican line of questioning successfully forced all of these so-called “witnesses” to admit that they either had no direct knowledge of any of President Trump’s alleged wrongdoings, or even more humiliating, that they could not point to a single impeachable offense in the President’s conduct.

At this point, we should not expect anything less than embarrassing and consistent self-owns from the Democrats, from now until November 2020. 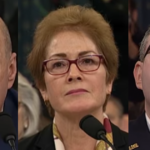 Our Take: How the Democrats Lost on Impeachment