The far-left terrorist group Antifa has struck yet again, with the city of Portland, Oregon once again becoming ground zero for their Marxist street violence.

Anticipating a rally by the right-wing group the Proud Boys, Antifa once again laid waste to the streets of Portland, viciously attacking innocent bystanders such as an older man and a little girl, in the name of their self-righteous “anti-fascist” crusade. And they did all of this in the name of their underlying ideology: Communism.

The same Communism that these so-called “anti-fascists” preach is the ideology that is currently fueling the crackdown on true freedom fighters thousands of miles away, in Hong Kong. It is the most telling contrast in the world, as privileged liberal protesters in America wave the hammer and sickle, while the genuinely oppressed peoples of Hong Kong wave the stars and stripes, and hold signs desirous of their own Second Amendment.

For all of the Left’s endless lecturing about “privilege,” they fail to see how they are truly the privileged ones, where they are free to fly the flag of Communism, as those living under real Communism risk their very freedom by flying our flag in their streets. Freedom still rings. And it will, as long as Antifa is in the minority.

Violent Antifa protests are breaking out in Portland, Oregon, following the pre-planned “End of Domestic Terrorism” event taking place in the city.

City officials have been preparing for the potential of dueling clashes, with the police force at the ready and additional agencies on standby. According to journalist and editor of Quillette, Andy Ngo, – who warned that Saturday’s events had the potential to be a “powder keg” – things are already taking a violent turn.

One of Ngo’s videos shows protesters attacking a bus, appearing to attempt to pull people out of the vehicle.

Another video shows a man who was allegedly maced and beaten by Antifa assailants.

“He was knocked unconscious to the ground. His partner or spouse was trying to protect him as mob still surrounded them. No police,” Ngo claimed. 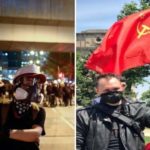 Our Take: Hong Kong vs. Portland: Freedom vs. Socialism