The great Mark Twain once said that “History doesn’t repeat itself, but it often rhymes.” If Hillary Clinton is even remotely serious about possibly running again, as she has recently suggested, then history may very well do both.

It’s hard to tell which aspect of this prospect is more pathetic: That the Democratic Party is seriously considering crawling back to the nominee who lost them the last election, or the fact that their current crop of candidates is so atrocious that this is their last resort. In the end, it will be a lose-lose for them: They either literally repeat their 2016 loss, or their loss in 2020 will rhyme with the previous election result.

President Donald Trump on Tuesday taunted failed presidential candidate Hillary Clinton, suggesting she could beat Elizabeth Warren for the 2020 Democrat nomination if she entered the race.

“I think that Crooked Hillary Clinton should enter the race to try and steal it away from Uber Left Elizabeth Warren,” Trump wrote on Twitter.

But Trump said Clinton should finally come clean about her deleted emails from her private server before running again.

“The Crooked one must explain all of her high crimes and misdemeanors including how & why she deleted 33,000 Emails AFTER getting “C” Subpoena!” he wrote.

A Rasmussen poll released Monday found both Trump and Clinton would receive 45 percent support in a potential matchup.

That prompted Donald Trump Jr. to joke about a Clinton 2020 run on Twitter.

“All I want for Christmas is for Hillary to run again,” he wrote. 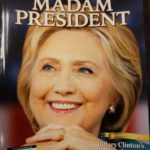 Our Take: Hillary for President?!