There really is a degree of irony in the regression of the modern Left’s goals and desires, and nothing better represents this than the turnaround in SJW/PC/woke culture.

Yesterday on AMERICA First, Laurence Fox shared his experience of how the Left resorts to criticizing its rivals by pointing out their race and gender, when the target in question is a white male. While they claim to be combatting racism, they themselves are racists as they use skin color to discriminate in political debate.

Then, in the viral racist video we played yesterday, black students at the University of Virginia demonstrates just how unashamed they are in declaring that “too many white people” around them makes them feel “uncomfortable,” and that they need a space for non-white students. This new version of reverse segregation is a far cry from the objectives of the Civil Rights movement 60 years ago, and the antithesis of the late Reverend Martin Luther King’s “I have a dream” vision.

When a social and political movement has managed to completely reverse 60 years of true progress, and displays such flaming hypocrisy with no self-awareness whatsoever, it will result in more pushback from the likes of Fox, Chappelle, and Gervais, and then the tide will turn. 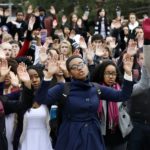 Our Take: Have the SJWs gone too far?