As if there weren’t enough proof already that impeachment is very unpopular with the American people, President Trump and the RNC’s record fundraising quarter has just severely dampened Democrat hopes for 2020.

The significance of raising $125 million in the third quarter, the highest recorded amount for a single quarter of any presidential campaign’s year in modern history, cannot be overstated. As the President’s campaign continues to attract millions in contributions from Americans across the country, the Democrats remain in debt, woefully under-raising compared to the Republican Party, and even relative to their own fundraising numbers at this same point during Obama’s first term. The writing may be on the wall, given how Democrat impeachment fever has only accelerated the will of voters to financially support President Trump and his party.

How much longer can the Democrats delude themselves into believing impeachment is popular? Call and let us know what you think, at 833-334-6752.

President Donald Trump’s reelection campaign and the Republican National Committee raised $125 million in the third quarter of the year, a presidential fundraising record.

The pro-Trump effort said Tuesday that it has raised more than $308 million in 2019 and has more than $156 million in the bank. Republicans aim to use the fundraising haul to fight off Democrats’ impeachment effort.

Former President Barack Obama and the DNC raised just over $70 million in the third quarter of 2011.

“We are investing millions on the airwaves and on the ground to hold House Democrats accountable, highlight their obstruction, and take back the House and reelect President Trump in 2020,” she said.

The fundraising announcement comes as the pro-Trump efforts launched their first major advertising campaign of the cycle. Trump’s team aims to devote $1 billion to his reelection. 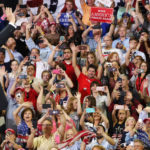 Our Take: Grassroots Support for Trump is Stronger than Ever