It’s no secret that Big Tech hold overwhelmingly anti-Conservative, anti-Trump, and even anti-American biases within their hearts, and express these views in their business practices. From mass censoring and de-platforming to deliberately giving personal information to the media, the only ones who have been fooled by their façade of “fairness” are themselves.

However, as it turns out, they are more than willing to acknowledge their prejudice when behind closed doors.

A shocking leaked video, courtesy of truth warrior James O’Keefe and his group Project Veritas, has pulled the curtain back on the ugly truth of Silicon Valley. In the video, one of Google’s leading figures, Jen Gennai, spoke to a gathering of Google employees about ways that the tech giant could “prevent it from happening again,” while describing President Trump’s victory as nothing more than “a ‘blip’ or ‘hiccup’ in history.”

This proves the disdain with which Big Tech view our republic, the results of our fair electoral system, and the average American voter like you. They are determined to overturn the results of past elections while also interfering in future elections, with the stated goal of getting their preferred candidates elected.

Russian oligarchs could only dream of acquiring the same level of electoral and political influence as Big Tech.

Breitbart: Project Veritas – Google Exec Decries Trump’s Election: ‘How Do We Prevent It from Happening Again?’

Undercover videos recorded by Project Veritas reveals that Google is determined to prevent the re-election of Donald Trump in 2020, and is altering its products with this aim in mind.

Here’s what Gennai says in the undercover video:

We’re also training our algorithms, like, if 2016 happened again, would we have, would the outcome be different?”

Gennai also declares her opposition to Democrat presidential candidate Elizabeth Warren’s proposal to break up Google. Why? Because, says Gennai, if Google is broken up it can’t prevent another “Trump situation.”

“Elizabeth Warren is saying we should break up Google. And like, I love her but she’s very misguided, like that will not make it better it will make it worse, because all these smaller companies who don’t have the same resources that we do will be charged with preventing the next Trump situation, it’s like a small company cannot do that.”

Gennai also declared that no amount of soft pressure from Congress or the White House will make Google change its ways. In other words, talk won’t help — if politicians want to change Google’s behavior, they’ll have to go beyond committee hearings and actually change the law.

According to her professional profile, Gennai works on “responsible innovation” in the Global Affairs division of Google — the same division run by Kent Walker, the Google VP who has declared his intention to make the populist-nationalist movement represented by Donald Trump a “blip” or “hiccup” in history, which he said “bends towards progress.”

Walker made these statements just days after the 2016 election, in a confidential video recording that was leaked to Breitbart News. 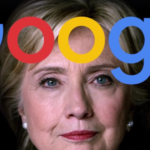 Our Take: Google’s Anti-Trump Bias, in Their Own Words