As the Democrats continue pulling out every dirty trick in the book to try to defeat President Trump, it becomes more apparent that they are panicking because they know that their prior plan have failed.

Their 2020 field is in absolute shambles. The once-frontrunner Joe Biden has all but collapsed, Elizabeth Warren is a socialist who is too far left for the main American electorate, and now the party thinks their best bet is a late entry by Michael Bloomberg.

At every turn, impeachment keeps backfiring on the Democrats. From the release of the transcript proving that there was no “quid pro quo” with Ukraine, to the revelations of corrupt behavior from the whistleblower Eric Ciaramella and his pro-coup lawyer Mark Zaid, it is becoming more apparent that such a coup against President Trump was always their plan, even when it was proven that he has done nothing wrong.

All of their previous attacks have failed miserably. From Stormy Daniels and the Hollywood Access tape, to attempted recounts and faithless electors, to the complete nothing-burger that was Robert Mueller’s two-year investigation. Collectively these demonstrate the utter contempt the Democrats have for not only the President, but also the 63 million Americans who elected him. 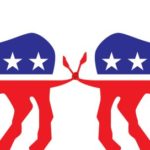 Our Take: From Impeachment to 2020, Democrats Have No Path to Victory