There are a select few dates in America’s past that mark a historic turning point, one in which the course of history would be changed forever. It’s safe to say that among the most recent examples is June 16, 2015. On that day, one of the most significant campaigns in modern history began, which would subsequently lead to one of the greatest political upsets of all time.

But it’s not enough to say that it’s a historic occurrence for a businessman with no political experience to become elected President of the United States. President Trump’s ascent and eventual victory launched a seismic shift in American politics, with the naysayers perpetually being proven wrong again and again and again, and the “elite’s” nostrums falling flat day after day.

As the President’s own celebratory Tweet demonstrated, just about every major figure in the Democratic Party and their PR branch, the Fake News Industrial Complex, insisted that Donald Trump would never become President. Before that, many insisted that he would never become the Republican nominee. Before that, most did not even believe that he would run in the first place.

This trend of anti-Trump voices being proven wrong has not abated since his election to the presidency; indeed, it has accelerated as his list of accomplishments grows ever longer. From unprecedented summit negotiations with North Korea, to building the Wall, to eradicating ISIS, to revitalizing the economy, President Trump continues to do what was thought to be impossible: Make America Great Again.

And just as importantly, President Trump has permanently shifted the core values and tactics of the modern GOP, and conservatism as a whole. What was once a party and an ideology seen as on the run from the onward march of the far-left through American politics and culture, just a few years ago is now turning the tide and winning again, against all odds. As such, the President has won over many people who were previously against him, as the “Never Trump” movement has now all but evaporated.

With the President still going stronger than ever, it’s almost hard to believe that this all started just four short years ago.

The Washington Examiner: They said ‘never’ to the man on the escalator four years ago. Not anymore.

President Trump announced his candidacy four years ago Sunday to the cheers of paid actors in Trump Tower and to the horror of many conservative leaders, who vowed to defeat him.

On Tuesday, Trump will launch his reelection bid before about 20,000 supporters in a Florida arena, and to applause from many former skeptics who say they misjudged him.

In 2016, Trump nearly toppled the Republican “big tent.” Wide-eyed social conservatives noted he used to back abortion rights. Security hawks gaped at dovish remarks on the Mideast and Russia. Free-market conservatives called him a protectionist who supported single-payer healthcare.

But as president, Trump has quieted concerns, winning deep tax cuts, appointing conservative judges, and renegotiating the North American Free Trade Agreement, while wowing hawks by moving the U.S. Embassy in Israel and withdrawing from the Iran nuclear deal.

“Who would have thought a supporter of Planned Parenthood would be the strongest pro-life president in history?” marveled Brent Bozell, the Media Research Center president and nephew of conservative icon William F. Buckley. “At the end of the day I think that Trump has done more for the concept of American exceptionalism than any president since Ronald Reagan.”

In 2016, Bozell contributed to the conservative National Review’s “Never Trump” edition, an effort to halt Trump’s momentum in the Republican primaries, featuring condemnation from Glenn Beck, Bill Kristol, Dana Loesch, and others.

“I think that people were looking at his record, which was in the opposite direction of the rhetoric, and a lot of people were Doubting Thomases,” Bozell told the Washington Examiner.

For the magazine, Bozell wrote that “Trump might be the greatest charlatan of them all,” expanding on Fox News that Trump was “a shameless self-promoter, a huckster.”

“God help this country if this man were president and he continued on in this way,” Bozell exclaimed at the time.

Many, but not all, of Bozell’s fellow Trump skeptics have changed their tune, including Loesch, a syndicated radio host and author, who scoffed in 2016 at Trump’s recent “conversion” to conservatism and worried about his business dealings.

“He has checked so many boxes for conservatives and Republicans, I don’t know how anyone can be dissatisfied,” Loesch said, praising Trump’s rollback of regulations, support for the military, and the roaring economy.

“With all of my concerns, I was really hoping to be wrong. I wasn’t one of those individuals so self-centered I hoped the country would do poorly,” said Loesch, who works with the National Rifle Association but commented in a personal capacity.

Sen. Lindsey Graham, R-S.C., one of Trump’s former critics on national security issues, said Friday that Trump “has exceeded every expectation I had.”

“I ran out of things to say about him in the campaign. I voted for somebody I wouldn’t know if they walked in the door, Ed McMullin,” Graham told conservative radio host Hugh Hewitt, another former skeptic.

“Everything that you and I and people who were pooh-poohing Trump about, he’s proven to have risen to the occasion, to be a commander in chief that has our military’s back, that I respect,” Graham said, citing the defeat of ISIS in Iraq and Syria and new military funding.

“Too many in Congress, both Republicans and Democrats, are letting partisan politics get in the way of doing the right thing,” the ex-CIA operative said recently.

Bozell said some Never Trumpers “are so offended by his personality and what they would see as a lack of decorum that I don’t think they will ever support him.”

Indeed, some conversions were slow. Beck last year said he would back Trump for reelection. Erick Erickson, editor of The Resurgent, got a call from Trump in January praising him for an article he wrote about a proposed border wall. Weeks later, Erickson declared, “I will vote for Donald Trump.”

Bozell said that despite his own criticism in 2016, he actually urged Trump to run in early 2015, before realizing to his disbelief that Trump was catching fire with the electorate. He thought Trump would lose but make a dent in the landscape. “I didn’t think he could win. But … I thought he might win in the future if he got out his dirty laundry,” Bozell said.

Loesch said she advises fellow conservatives that “if you have a problem with Trump the person, you have to look at the issues. How are your issues being advanced?”

“This is an avatar for our issues,” she said of Trump. 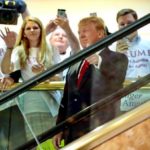 Our Take: Four Years Ago, Donald Trump Changed the World