The last night’s Democratic debate was proof of two things: First, the Democratic field is still as divided as ever, and now the candidates are getting desperate. After mercilessly pummeling billionaire Michael Bloomberg, they wasted no time taking shots at each other over every issue trendy Leftist imaginable.

But even more importantly, they confirmed that there are truly no “moderates” in this field. Even as a handful of candidates criticized “Medicare for all,” they still expressed support for even more radical ideas.

“Quid Pro” Joe said that he would bring America back into the disastrous Paris Climate Accord, while Mini-Mike boasted about how many coal-powered plants his initiatives have shut down across the country. Amy Klobuchar, speaking in support of the Obama’s un-constitutional amnesty program DACA, said that illegal aliens “are the future” of America. And Sanders and Warren continued to maintain their belief that billionaires simply “shouldn’t exist.”

It was a dystopian montage of the most anti-American, anti-freedom, and anti-prosperity pledges and statements you will ever see. Every single one of these candidates is running on a platform of undoing all of President Donald Trump’s historic accomplishments and harming the American economy and national security, simply so they can implement their progressive vision for a Socialist, open borders, and “green” America. And that will be our future of if we do not ensure another four years in the White House for President Trump. 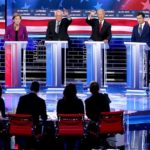 Our Take: For the Democrats, it’s Still a Race to the Left