One of the most unsettling aspects of President Trump’s opposition within the Deep State is their unwillingness to recognize the will of the American people. FEC chairwoman Ellen Weintraub is the latest example of this.

Aside from her obvious political biases as a Democrat, Weintraub recently declared in a CNN interview that “there is no evidence of rampant voter fraud in 2016.” This is even despite ample research uncovering evidence that there was, in fact, voter fraud in the 2016 election.

As the Heritage Foundation reported, there were nearly 3 million people registered to vote in two or more states in 2012, and there have been at least 1,217 individual cases of voter fraud confirmed in recent years. And that’s just scratching the surface.

As FEC chairwoman, it should be Weintraub’s job to fight for election integrity and take all voter fraud seriously. But because this voter fraud helped Hillary Clinton and Democrats in general more than Donald Trump, Weintraub chooses to deny the truth and turn a blind eye to corruption when it benefits her preferred party.

This is why it is all the more important that the American people continue to fight for accountability in government and exercise their right to vote legally. Because it is clear that some elements of the government, swampdwellers like Weintraub, will not be doing the same.

New concerns are being raised that online conservative media outlets could face federally imposed censorship going into the 2020 elections.
Years after Republicans on the Federal Election Commission claimed Democrats were targeting conservative speech on outlets like the Drudge Report, the liberal head of the FEC is teaming with an anti-Trump free speech advocacy group to host a symposium targeting online “disinformation.”

The September event is inspired by Russia’s online efforts during the 2016 election and is expected to include Republicans and Democrats as well as big internet firms such as Google, Facebook, and Twitter.

Politico reported this week that FEC Chairwoman Ellen Weintraub is hosting the event and summoned the tech giants. Her invitation reads, “The goal of the symposium will be to identify effective policy approaches and practical tools that can minimize the disruption and confusion sown by fraudulent news and propaganda in the 2020 campaign,” according to the outlet.

CNET reported that the event will be co-hosted by PEN America, a free speech advocacy group. It has rapped Trump for his criticism of the media.

Some conservatives, including the former Republican FEC chairman who raised suspicions of censorship efforts against right-leaning media like Drudge and Fox, warned that the event could lead to a crackdown on online speech.

“The FEC has no business policing the truth or accuracy of speech of any kind by American citizens on the internet,” said Lee Goodman, a former Republican FEC chairman.

He led a bid to protect conservative media and openly suggested that outlets like Drudge could run into trouble with liberal political speech police.

At the time, Weintraub rejected targeting conservative — or any — media. “The media’s coverage of our political system is fully protected, generally by the First Amendment, and specifically by the Federal Election Campaign Act and Commission regulations. I take these protections very seriously,” she said.

Goodman said he sees concerns in summoning tech giants to a FEC-endorsed speech seminar and warned about a double standard in policing liberal and conservative websites.

Recalling his fight on the issue, he said, “I concluded that conservative speakers and press would always be held to a double standard if government got to regulate them. Now the hook to get Drudge is something vaguely defined as ‘disinformation,’ however that might be defined. The FEC has no business regulating the internet or browbeating internet platforms to censor American citizens.”

Goodman, an election lawyer, said that investigating foreign fake news is a job for the FBI, not the FEC. “The FEC’s only role is prohibiting foreigners from spending money to influence American elections, and foreign propaganda should be policed by the FBI and Department of Justice,” he said.

Weintraub’s effort comes as the FEC is being sidelined with its latest resignation. When Vice Chairman Matthew Petersen leaves today, only three members will be left. The agency requires four commissioners to conduct business like enforcement.

Concerns about the FEC, and GOP frustration that Weintraub has served years longer than scheduled, is prompting a push to nominate a whole new six-member elections board. 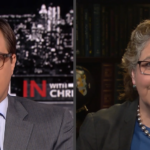