If there’s one aspect of the mainstream media in the Trump era that’s even more obnoxious than their inability to tell the truth, it’s their stubborn insistence that they are telling the truth, even as they lie every single day.

Whether it’s falsely labeling certain terrorist acts as “right-wing” or deliberately twisting a Congressman’s words, the media continues to parade themselves as the purveyors of truth and objective journalism. This could not possibly be further from reality.

This weekend, one fake journalist determined that he could out-lie the rest. Ian Bremmer of Time magazine recklessly tweeted out a fake quote that he directly attributed to President Trump, accusing the President of saying that Kim Jong-Un would make a better President than Joe Biden. When pressed to provide evidence of this quote, he eventually tweeted a follow-up admitting that it was false, but justified his lie by claiming that it was “plausible” for President Trump to say something like this.

In this day and age, the Fake News Industrial Complex believes that they can hide behind “freedom of the press” to justify spreading propaganda, committing defamation, and attempting to derail an entire presidency. Legal action against defamation and willful misinformation should be taken against those such as Bremmer who deliberately, and openly, spread lies about any President, because there is a distinct line between free speech and libel. Ian Bremmer crossed it with no apologies, and the significant number of people who fell for his “quote” is proof of how dangerous such lies can be.

The Daily Caller: Time Magazine Columnist’s Trump Quote Went Viral – Then He Admitted He Made It Up

“President Trump in Tokyo: ‘Kim Jong Un is smarter and would make a better President than Sleepy Joe Biden.’” Bremmer wrote on Twitter.

While Trump did praise the North Korean dictator’s insult of former Vice President Joe Biden, the president never said what Bremmer quoted him saying — because Bremmer made it up.

Bremmer left the false post up for several hours before conceding he made up the quote and deleting the tweet, which he defended as “plausible.”

“This is objectively a completely ludicrous quote. And yet kinda plausible. Especially on twitter, where people automatically support whatever political position they have. That’s the point.” Bremmer wrote in a since-deleted correction.

Bremmer’s tweet went viral among Trump critics before he took it down.

“The President of the United States praising a cruel dictator who violates human rights, threatens nuclear attacks, oppresses his people, and kills political opponents, IS NOT FREAKING NORMAL,” Navarro added.

Navarro was far from alone in falling for the made up quote.

Lawrence called it “equally incredible how easily manipulated the president is and also that democrats havent [sic] figured out how to take advantage of this yet,” pointing to Bremmer’s false tweet.

Other critics of the president similarly promoted the false information. 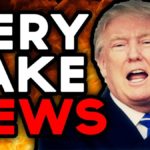