Last night’s debate confirmed the trend of recent weeks: Elizabeth Warren, the avowed socialist senator, is now the Democrat Party favorite you’re challenge President Trump. From her being allotted the most speaking time, to being the subject of the majority of the attacks by her fearful rivals, Warren has clearly surpassed the aging and corrupt Joe Biden for the top slot.

With it, another thing is also clear: The Democrats have truly ceded everything to the far-left, as they now choose a socialist over a longtime establishment politician who claimed to be a moderate, (but still sought to appeal to the same far-left extremists). The inmates are now running the asylum.

Do you think Elizabeth Warren will become the nominee? Call in and tell us what you think, on AMERICA First: 833-334-6752.

Warren also saw a boost in individual states. YouGov surveyed 506 registered Democrats in New Hampshire. Thirty-two percent of those respondents chose Warren as their first choice, followed by Biden with 24 percent and Sanders with 17 percent. The margin of error is +/- 5.4 percent.

The survey showed a tighter race in the early caucus state, Iowa. Of the 729 registered Democrats surveyed, 22 percent chose both Warren and Biden. Sanders came in a close third with 21 percent support, followed by Buttigieg with 14 percent support. The margin of error for the Hawkeye State results is +/- 4.6 percent.

Biden, however, continues to hold a strong lead in South Carolina, with 43 percent of the 915 registered Democrats surveyed choosing the former vice president. He topped his closest competitor, Warren, by 25 percent. She garnered 18 percent, followed by Sanders with 16 percent. The margin of error is +/-3.9 percent.

While Biden still holds the greatest electability, he has experienced a ten-point drop in the last month, falling from 77 percent to 67 percent. Warren’s electability, however, has slightly grown, jumping from 55 percent in September to 56 percent in October.

Biden and Warren will face each other on the debate stage alongside ten other candidates at Otterbein University in Westerville, Ohio, on Tuesday evening. 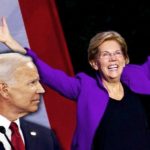 Our Take: Elizabeth Warren is Now the Anointed One