Alongside Kimberly Guilfoyle, Don Jr. made a very bold foray into hostile territory by appearing on the far-left TV show The View, where the obnoxious hosts all took turns asking one loaded question after another, on such subjects as the whistleblower and the media’s treatment of President Trump.

Don Jr., unfazed, did not back down even as they repeatedly tried to shout him down. He pointed out their hypocrisy in violating their own standards, from Joy Behar once wearing black face to Whoopi Goldberg defending the child rapist Roman Polanski. They continued to scoff and deflect, and when even the audience began applauding for some of the things Don Jr. said, Behar turned to directly attacking her own audience.

In just this one appearance alone, he exposed these leftists for what they – and many other leftists – truly are. Hysterical hypocrites who blindly deflect and insult whenever they are called out for their own problems, refusing to see the flaws in themselves and instead baselessly attacking their opponents with the same insults. He spoke truth to power, and proved that it pays to be a fighter. 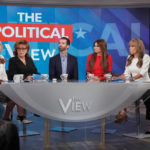