President Trump never fails when it comes to two things: Delivering the MAGA Agenda, and making the Left’s collective head explode. His most recent comments have produced no shortage of the latter.

Of course, President Trump is right when he says that he is “the chosen one;” specifically, he was referring to the ongoing trade war with China. And there should be no doubt in anyone’s mind that he is most definitely the right man for the job when it comes to taking on China and holding them accountable for decades of cheating us on trade and manufacturing.

But he is the chosen one in many other ways too. He is by far the only one who truly understands the threat of illegal immigration, as well as the need for a much more sensible foreign policy. In all of these aspects, President Trump is significant because he has completely shredded all past notions of political orthodoxy and “business as usual” with regards to these major issues. He is the one who pulled back the curtain on the elite in our country, in both parties, and has awakened millions of Americans to what truly needs to be done to combat these problems and truly fight for America, which is something the establishment political class never cared to do.

Everything happens for a reason, and this is no less true when it comes to whoever becomes President of the United States. Donald J. Trump was meant to be President for all of these reasons, and more. And that is why the Left hates him so much, because it is our time to shine instead of theirs.

Breitbart: Donald Trump: ‘I Am the Chosen One’ to Fight China

Looking up briefly in the sky as he spoke about his fight with China, Trump declared, “I am the chosen one. Somebody had to do it, so I am taking on China, I’m taking on China on trade, and you know what? We are winning.”

The president spoke to reporters as he left the White House for a trip to Kentucky to for a speech to American’s veterans.

Trump continued to defend his struggle with China, telling reporters outside the White House it was up to him to do what past presidents should have done sooner.

“I was put here by people to do a great job and that’s what I’m doing,” he said.

He suggested that China was probably waiting for a Democrat like “Sleepy Joe” Biden to win the presidency, rather than make a deal with his administration.

Trump also spoke about his efforts on Tuesday, during remarks with reporters in the Oval Office.

The president said China was experiencing one of the worst months in half a century economically under his tough trade policies and signaled optimism that they were ready to make a deal.

On Tuesday, he admitted that there were some effects to the ongoing trade battle, but he would keep fig

“I could be sitting right now with a stock market that would be up 10,000 points higher if I didn’t want to do it,” he said and added, “You should be happy that I’m fighting this battle because somebody had to do it. I don’t think it’s sustainable with what was happening.” 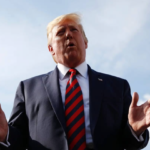 Our Take: Donald Trump is The Chosen One. That’s Why the Left Can’t Stand Him.