One of the biggest lies being perpetuated by the mainstream media right now is that the Democrats are somehow the party of truth, supposedly seeking out corruption and illegal activity in the Trump Administration.

But not only is that the exact opposite of the truth, but Democrats will never stop manufacturing non-existent crimes, because they cannot forgive Donald Trump for defeating Hillary Clinton.

Yet none of this matters to the Democrats, who rushed forward with impeachment even before the transcript of the call was released. After it was released, they claimed that the transcript may have been forged, or that even in its entirety, it wasn’t enough.

Democrats will not stop, no matter how many times they are proven wrong. They will never be satisfied until they have nullified the votes of 63 million Americans.

The complaint, received by acting director of national intelligence Joseph Maguire a number of weeks ago, alleges that President Trump pressured Ukraine President Volodymyr Zelensky to look into the business dealings of Hunter Biden, the son of former Vice President and 2020 White House hopeful Joe Biden, back in July.

As Breitbart News reported earlier this year, Biden forced out former Ukrainian prosecutor Viktor Shokin as he was investigating an energy company called Burisma Holdings, which was paying Biden handsomely as a member of its board. The former vice president even boasted to the Council of Foreign Relations last year that he had threatened to withhold $1 billion in U.S. aid unless the prosecutor was fired. (He did not tell the audience about his son’s role.) Conservatives claim Biden obstructed justice to protect his son — who enriched himself using his father’s prestige.

Although Schiff stands behind the so-called “whistleblower’s” crediblity, the Department of Justice on Wednesday confirmed that the Office of Intelligence Community Inspector General found the individual who made the complaint has a “political bias” that was “in favor of a rival political candidate.”

According to a memo released by the Justice Department Office of Legal Counsel, the inspector general stated that it received a complaint of “urgent concern,” though the OLC determined the matter “does not involve an ‘urgent concern’” or require that the national intelligence director send the complaint to House and Senate intelligence committees.

During a joint press conference at the United Nations, both President Trump and Zelensky confirmed the conversation occurred and affirmed no pressure was applied to probe the Biden family. “I think you read everything. I think you read text. I’m sorry, but I don’t want to be involved to democratic open elections, elections of USA. No, sure, we had I think good phone call. It was normal. We spoke about many things, and I — so I think and you read it that nobody pushed me,” Zelensky said.

Earlier Wednesday, the White House released a transcript of the call, which shows the pair discussed U.S. military aid to Ukraine and Hunter Biden — and there was no quid pro quo discussed at any point of the conversation.

Nonetheless, the call prompted a group of House Democrats to come out in favor of impeachment and House Speaker Nancy Pelosi (D-CA) to endorse a formal impeachment inquiry against the president.

Asked for his thoughts on the move by Pelosi, President Trump suggested the California Democrat has lost control of her caucus.

“[Speaker Pelosi’s] been taken over by the radical left, the whole Democrat Party. You take a look at what’s happening in the media today. The whole party is taken over by the left and thank you very much — my poll numbers have gone up,” he said.

Of the impeachment probe, House Republican leader Rep. Kevin McCarthy (R-CA) told Breitbart News that Democrats “lost their minds” and predicted it will “backfire on them” in the 2020 election.

“The left has officially lost their minds — they are so fixated on their imaginary impeachment that they are getting nothing else done,” said McCarthy. “266 days in power and what have Nancy Pelosi and the Socialist Democrats accomplished? Absolutely nothing.” 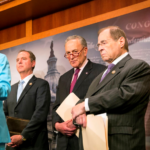 Our Take: Democrats Will Never Stop