With the FakeNews media up in arms about President Trump’s tweets, and the subsequent chanting at his North Carolina rally, about Ilhan Omar, their hypocrisy is yet again under a magnifying glass. From ignoring her blatant anti-Semitism to making excuses for her comments on 9/11, it has become almost a game for the legacy media to see who can cover for Omar more than anyone else.

However, one example of the media’s willful blindness to the truth goes far beyond your typical example of a double-standard in regards to two comparable situations. This particular case deals with an incident that is far worse than anything President Trump or his supporters have said or done, and reflects truly un-American calls for deportation based on political differences, with the threat of real power behind such statements.

Back in 2017, Jerry Nadler demanded that the House Judiciary Committee be granted access to all of the immigration paperwork relating to your very own host of AMERICA First, Dr. Sebastian Gorka. Nadler and other Democrats – including Senators Dick Durbin, Dick Blumenthal, and Ben Cardin – used a far-left conspiracy theory to smear your host as somehow having ties to neo-Nazis (a blatant lie, as has been noted in The Federalist and by other actual journalists). Based on this unfounded claim, they accused Dr. Gorka of potentially falsifying his naturalization application, which is libel.

Yet no Republican has explicitly called for Omar’s deportation, despite her racism and anti-American statements making her truly unfit for the office that she currently holds. Democrats were openly suggesting the possibility of deporting a top White House official simply because they disagreed with his politics, and the media completely ignored the story. This is all the proof you should need that the “mainstream” media is actively working with the Democrats to propagandize the American people and intimidate those they politically disagree with.

The Federalist: When Democrats Threatened To Deport A Top Trump Aide, Media Yawned

The mainstream media can’t stop talking about how President Trump is a racist for tweeting that four Democrat members of Congress can “go back to where they came from.” But when Democrats threatened to deport naturalized U.S. citizen Sebastian Gorka over phony allegations, the media yawned.

Reps. Ilhan Omar, Alexandria Ocasio-Cortez, Ayanna Pressley, and Rashida Tlaib — also known as “The Squad” — were spewing anti-Semitic rhetoric, calling Democratic House Speaker Nancy Pelosi racist, and insinuating that if you aren’t an activist for any non-white race or ethnicity, the Democrats don’t need you.

“We will never be a Socialist or Communist Country. IF YOU ARE NOT HAPPY HERE, YOU CAN LEAVE,” Trump tweeted.

The media has gone absolutely wild over these tweets. CNN even hosted white nationalist Richard Spencer to weigh in on them in an attempt to associate Trump with his odious views.

Yet when Democrats spearheaded deportation efforts against former Trump adviser Sebastian Gorka, the media was silent. In 2017, Rep. Jerry Nadler (D-NY) asked the White House to hand over Gorka’s immigration paperwork to the House Judiciary Committee. Gorka is a British-born Hungarian-American who was naturalized in 2012, five years before Nadler attempted to use state power to intimidate him.

However, as David Harsanyi at The Federalist points out, the author of this hit piece admitted that there is no solid evidence for its headline or even the smears against him as an anti-Semite. The author concludes:

“There is no evidence that Gorka himself has ever engaged in overtly anti-Semitic acts or participated in any of the Guard’s activities. But Gorka and some of his political supporters have argued that he has fought anti-Semitism throughout his career. The newly available video footage signals that Gorka not only failed to fight anti-Semitism, but also supported an openly intolerant paramilitary group and publicly rejected the Jewish community’s concerns about their own safety and the safety of other minorities due to the group’s founding.”

The Nazi-allied group in question is called the Vitézi Rend. The Forward article claimed that Gorka wore a Vitézi Rend medal during Trump’s inauguration ball. However, after real journalists stepped in and asked Gorka what the medal stood for, we soon found out Gorka wears a ‘V’ pin to honor his father.

“Since childhood, I have occasionally worn my father’s medal and used the ‘V’ initial to honor his struggle against totalitarianism,” Gorka told The Tablet.
Despite the poor journalistic integrity of The Forward author, Nadler and other House Democrats still used her article to attack Gorka and the White House. Sens. Dick Durbin (D-IL), Richard Blumenthal (D-CT), and Benjamin Cardin (D-MD) pressed the departments of Homeland Security and Justice to confirm whether Gorka was under investigation for falsifying his U.S. naturalization application.

So, let me get this straight: Democrats want to use government power to threaten new U.S. citizens if they have right-leaning political ideologies, but we should let every foreign citizen who illegally enters the United States in and give them voting rights, no questions asked? This is political hypocrisy at its finest.

Omar’s anti-Semitic tweets are legitimate proof of her horrific ideology. All Democrats had on Gorka was a poorly written article. Yet Democrats will not condemn Omar for her anti-Semitic rhetoric, while his association with the Trump administration is enough to trigger calls for deporting a U.S. citizen. The American people see through Democrats’ obvious and ridiculous double-standard on race-related rhetoric. 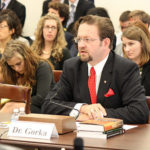 Our Take: Democrats Want to Deport People They Don’t Like