The implications of the Watergate scandal have since gone far beyond any potential for future abuse of government power. While it could be argued that increased media scrutiny and oversight of the executive branch has prevented repeats of Richard Nixon’s mistakes, the price to pay for this check on power just may have been to give even more power to other actors in the political world.

Ever since Watergate, journalism has become less about seeking the truth, and more about taking out someone in a position of power. Today’s excuses for “journalists” just want to be the next Woodward and Bernstein, and would rather be remembered as “the next reporter to take down a President,” rather than as an actual fact-finder or objective journalist.

Their sad display of former Nixon lawyer John Dean is just the most shallow attempt yet at pining for impeachment as the only solution to the “problem” of President Trump. As Congressman Matt Gaetz pointed out, Dean has made a career out of accusing multiple Presidents of being the next Richard Nixon, without the slightest shred of proof. They tout someone who played a role in the unraveling of Watergate and say, “See? He knows a thing or two about presidential scandals, so obviously we should impeach Trump when he says we should!”

But while Democrats and the media continue chasing the ghost of a real scandal, President Trump continues to bring the nation into a new era of prosperity, strength, and national pride. Let the Democrats continue to wallow in their fever dreams from the 1970s; the American people will be perfectly content with enjoying the nonstop success that this country has seen since November 8, 2016.

Mediaite: Gaetz Exchanges Fire With ‘Ghost of Christmas Past’ John Dean in Wild Showdown: ‘You’re Here as a Prop’

Rep. Matt Gaetz (R-FL), a vociferous and consistent critic of the Mueller investigation, assailed former Nixon White House counsel John Dean during his testimony before the House Judiciary Committee on Monday, accusing him of seeking to profit from his criticism of President Donald Trump.

Gaetz opened his aggressive questioning by pointing out that Dean has compared both Trump and former President George W. Bush to Nixon. After asking how much money he made from his book on the subject, the congressman asked Dean, a CNN contributor, point blank: “How much do you make from CNN?”

“I don’t really know exactly,” Dean replied. “Mr. Gaetz, I appreciate you were not born at the time that this all happened,” he added, prompting murmurs from the room.

“Do you believe if we turned the lights off here and maybe lit some candles, got out a ouija board, we could potentially raise the specter of Richard Nixon?” Gaetz joked, before mocking Dean as “the ghost of Christmas past.”

“You’re here as a prop. You’re functionally here as a prop because they can’t impeach Donald Trump,” Gaetz argued, speaking over Dean’s attempts at protest. He concluded his statement by railing against the “false accusation” that Trump was an “agent of Russian” and calling on the investigators to be investigated.

“The witness may answer the question,” Nadler said at the conclusion of Gaetz’s statement.

“That was a speech,” Dean said. “I don’t know if I can respond to it, it’s not sufficient time.” 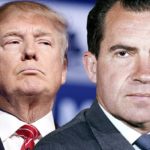 Our Take: Democrats try (and fail) to recreate Watergate