All that matters to them is that all of these things happened because of President Donald J. Trump. They will never support anything that he does, and they will stop at nothing to remove him from office for no reason whatsoever.

House Democrats passed a resolution Thursday to formalize the rules and proceedings regarding their impeachment inquiry against President Donald Trump.

The House Democrats passed H. Res. 660 resolution 232-196, that would establish the rules and proceedings surrounding impeachment.

Speaker Nancy Pelosi (D-CA) has insisted for weeks the House had no constitutional requirement to vote on a bill that would authorize an impeachment inquiry.

The resolution has engendered criticism from some swing district House Democrats. Rep. Van Drew (D-NJ), a freshman Democrat, said that he would not vote the resolution because impeachment would “not be good Democrats of Republicans.”

Republicans and Democrats delivered passionate speeches before the House vote.

House Speaker Pelosi said “nobody” comes to Congress to impeach a president.

McCarthy said that Congress has delivered “more subpoenas” than they have passed “laws.”

The California conservative said Democrats have pursued an agenda “devoid of solutions.”

Rep. McCarthy also said Democrats have moved towards impeaching Trump because “they’re scared they can’t beat him on the ballot box.”

Rep. Debbie Lesko (R-AZ), a House Freedom Caucus member, said this “resolution for a sham impeachment process is a farce.” 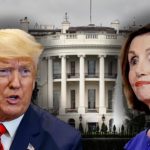 Our Take: Democrats Put Their Political Agenda Over America’s Success