If the first half of last night’s debate proved that none of the Democrats are capable of taking on President Trump, then the second half proved that they are completely unqualified to ever serve as President of the United States.

Not to be outdone by the first debate’s flurry of blatant pandering to Latinos with bad Spanish, the candidates on the second stage proved where their loyalties lie. When asked if their universal healthcare plans would cover illegal aliens, all ten candidates on stage raised their hands.

That’s right: Ten candidates for the highest office in the land explicitly and unapologetically vowed to put illegal aliens ahead of regular American citizens, and leave the bill with the American taxpayer. That is tantamount to economic treason, and proves that none of them are serious about serving American interests.

It may be fun to joke about the debates and the absurd statements, from “transgender reproductive justice” to cancelling student debt. The memes may be enjoyable, but the fact remains that this is a serious existential crisis. The social, moral, and political future of our country is at stake, and these avowed Socialists who pander to illegals have every intention of destroying America as we know it.

President Trump blasted the contestants in the second Democratic presidential debate on Thursday when they all declared their support for health care coverage for undocumented immigrants.

All of the candidates — including former Vice President Joe Biden, Sen. Kamala Harris and South Bend, Indiana, Mayor Pete Buttigieg — raised their hands when asked by an NBC moderator if they would support a health care plan that would cover undocumented immigrants.

“All Democrats just raised their hands for giving millions of illegal aliens unlimited healthcare,” Trump wrote on Twitter from Japan, where he is to attend the G20 Summit.

“How about taking care of American Citizens first!? That’s the end of that race!”

Later, as he met with German Chancellor Angela Merkel, Trump again admitted that he had sneaked a peek at the television.

“Unfortunately, they didn’t discuss what they’re giving to American citizens,” he said of the Dems. “That’s not a good thing.”

He then explained to the chancellor, “You know they have a debate going on . . . They definitely have plenty of candidates, that’s about it. So I look forward to spending time with you rather than watching.” 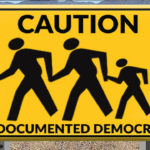 Our Take: Democrats Put Illegal Aliens Ahead of American Citizens