For many, the Netflix series “House of Cards” was an entertaining – albeit dark, cynical, and ruthless – tale of corruption in American politics. In 2013, the very idea of a high-ranking American politician being able to literally get away with murder seemed more like fantasy than reality, even if Francis Underwood, the lead character, was a Democrat.

But in 2019, Democrats in the real world are determined to blur the line between fantasy and reality, which includes copying one of Frank Underwood’s most shocking tactics from the show.

Oregon’s governor, Katherine Brown, has just proven how far the Democrats will go in pursuit of their delusional global warming policies. With a sweeping bill aimed at giving the government far more regulatory power to combat “climate change,” Republicans in the Democrat-controlled State Senate have taken a stand against what they know will be a massive power grab; all the Republican members have left the Capitol to prevent the chamber from reaching the necessary quorum of 20 members needed to even hold the vote.

In taking a stand against one power grab, they now face the wrath of an even greater abuse of power. Governor Brown has mobilized the state police to arrest the Republicans and force them back to the Capitol for the vote.

For all the false and shameless comparisons that the Left loves to draw between the Republican Party and the Nazis, the image of armed police marching across a state to hunt down and detain political opponents is certainly far more authoritarian than simply enforcing our borders.

And, like California, Oregon now stands as a perfect example of what one state would look like under total Democratic control; just imagine what Democrats would do if they had control of the entire country.

Oregon’s Democratic governor, Kate Brown, has dispatched state troopers to find missing Republican senators and bring them back to Salem to legislate.

All 11 Republican senators are in hiding, at least some of them out of state, in order to prevent the Senate from having the quorum it needs to operate. They can’t abide the Democrat-backed carbon cap and spend bill that is up for a Senate vote today.

When Republicans failed to show up on the Senate floor for today’s 11 a.m. session, Senate President Peter Courtney of Salem, a Democrat, asked the sergeant at arms to search the Capitol for the missing lawmakers. That search proved fruitless.

In response to the walkout, Courtney formally requested that Brown dispatch Oregon State Police troopers to round up the missing Republicans.

Brown quickly granted that request. “It is absolutely unacceptable that the Senate Republicans would turn their back on their constituents who they are honor-bound to represent here in this building,” she said in a statement. “They need to return and do the jobs they were elected to do.”

Speaking on the partially vacant Senate floor, Courtney said, “I apologize to the citizens for taking (state troopers) off the streets to look for (missing lawmakers).”

Oregon’s constitution allows the majority party to “compel” the attendance of absent members of the legislature. The process is rarely used, though.

A news release from the Oregon State Police said the governor has “given a lawful directive which OSP is fully committed to executing.”

Perhaps in reference to a comment by Sen. Brian Boquist, R-Dallas, that the state police should “send bachelors and come heavily armed,” the news release said troopers are “utilizing established relationships to have polite communication with these Senators. While we obviously have many tools at our disposal, patience and communication is and always will be our first, and preferred, option.”

By Thursday evening, state police provided more information in a release, saying that “several” Senators had been contacted and that the agency will “go to great lengths” to avoid physically arresting and handcuffing lawmakers. No physical contact is permitted, the release continued, without permission from the police superintendent.

Most interesting, the agency noted that troopers are receiving assistance from “out of state resources,” though state police did not elaborate.

Senate Democrats also announced that missing GOP lawmakers would be fined $500 per day. The money will be deducted from their per diem and salary.

By Thursday afternoon, an online fundraiser had raised more than $6,000 in support of the Senate Republicans.

“Please help our courageous senators,” wrote the organizer, who identified herself as Carol Williams of Silverton.

In 2001, Oregon House Democrats walked out and hid to stop a vote on a Republican legislative redistricting bill. They stayed away, bringing House business to a halt, for almost a week.

Earlier this legislative session, Senate Republicans walked out for nearly a week. But the early May walkout ended when Democrats agreed to kill two bills that Republicans opposed. In that case, Democrats did not send state troopers to look for the missing lawmakers.

The Legislature’s top lawyer advised lawmakers in 2016 that the state Constitution gives the governor the power to order state police to arrest absent lawmakers. But, Legislative Counsel Dexter Johnson wrote, state troopers only have the power to arrest missing lawmakers in Oregon, not in other states or in Canada. 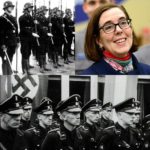