The Democrats have accumulated quite the laundry list of failed efforts to stop Donald Trump from continually winning. From the illegal surveillance on his campaign to the failed Mueller probe, they have been throwing everything they can at the wall to see what sticks (Nothing has stuck).

The conclusion from Robert Mueller’s team that President Trump committed absolutely no crimes whatsoever marked a massive deflation of Democrat spirits, as their top boogeyman of “Russian Collusion” was proven to be a hoax. But that hasn’t stopped them from desperately trying to stop President Trump.

Now, House Judiciary Committee Chairman Jerry Nadler has issued another round of totally frivolous subpoenas for 12 of President Trump’s associates, from the campaign and the Administration, past and present. The Democrats claim that their newest reason is to scrutinize the Administration’s immigration policies, with absolutely no specifics given as to what, if anything, is supposedly the issue.

This is all because they have absolutely nothing else left. “Russian Collusion” was proven to be a hoax. The accusations of sexual assault by President Trump have been debunked. Now they seek to find some issue with the President’s handling of perhaps the most dire situation in our nation today, the crisis on the southern border. If recent history is any indication, there will be nothing there again. But facts and common sense aren’t about to stop Democrats from trying anyway. For them, reality is optional (credit to Chris Plante for that gem!).

Townhall: House Dems: Subpoenas Are Coming So We Can Get To The Bottom Of Trump’s Immigration Policies

Specifically, the Committee wants to learn more about Trump’s “‘zero tolerance’ policy and other family separation policies and practices; detention of children and families; and discussions about or offers of presidential pardons to Department of Homeland Security officials or employees.”

“This week, the Committee will take an important step in moving forward with oversight of the Trump Administration. For months, we have held hearings and sent letters to the agencies of jurisdiction involved with implementing a catastrophic and inhumane family separation policy at the Southern border.

Many questions remain and it is past time for a full accounting of this policy and practice,” Nadler said in a statement. “The Committee will also move forward with our efforts to request information from critical witnesses as part of our ongoing investigation into obstruction, corruption and abuse of power by the President and his associates. As always, I remain open to reaching a reasonable accommodation and will not issue subpoenas if the information we are seeking is voluntarily provided. We will get answers one way or the other.”

The Committee plans to subpoena:

Various members of the House Judiciary Committee Democrats sent letters to Department of Homeland Security (DHS) heads and a U.S. Customs and Border Protection (CBP) Commissioner for various reasons, including to investigate the deaths of children being held in detention centers.

Nadler and Subcommittee Chairs sent a letter in February to President Donald Trump to demand answers after he declared a national emergency at the southern border and to request hearings with White House Counsel Pat A. Cipollone and Justice Department officials.

“Contrary a series of misleading statements that have come from the White House, including your referring to a number of incorrect and unsubstantiated statistics today, there is no national emergency at the southern border,” the letter read. “Undocumented immigration has been decreasing for years.

Border crossing attempts are at 40-year lows. For example, Customs and Border Protection (CBP) apprehended over 1.6 million people attempting to enter the country without authorization in 2000; but over the last few years, CBP has apprehended just a fraction of that, between 400 and 500 thousands individuals yearly.”

The Committee’s Ranking Member, Rep. Doug Collins (R-GA) believes this has to do with Special Counsel Robert Mueller’s scheduled testimony next week.

“Today’s latest effort to relitigate the special counsel’s investigation remains unimpressive and unproductive. Mr. Mueller’s team issued more than 2,800 subpoenas before concluding that no Americans conspired with Russia,” Collins told Fox News. “Even if Chairman Nadler still believes subpoenas are conversation starters, it’s hard to imagine this handful of subpoenas will do anything but reinforce the principal conclusions we’ve been able to read about for months,” Collins said in a statement.

Nadler has made it his personal mission to obtain documents for an extensive Trump probe. This is just his latest move in a bigger game. 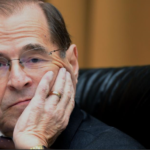