Another obvious reason for the Democrats hitting the panic switch and going for impeachment is their obvious massive insecurity about their own electoral chances.

If the Democratic Party truly believed that it is in a position to defeat President Trump in 2020, then they wouldn’t ever bother with impeachment and would instead try to defeat him “fair and square.” But, unsurprisingly, with their major candidates all making fools of themselves and harming their own electability, it’s no wonder that the Democrats in Congress see impeachment as a the only alternative option, rather than contesting a fair and balanced election.

However, this is instead just one more instance of Trump Derangement Syndrome overwhelming any strategic sense the DNC may have had left. Now, with the widely unpopular impeachment officially on the table for the Democrats, their chances at winning the White House next year are even smaller than they were before this latest smear attempt.

Perhaps they were doomed from the start, and perhaps they only just now sealed their fate. They have demeaned the stature of Congress, and it’s powers of impeachment, but they may just have won President Trump’s his re-election.

President Donald Trump reacted Tuesday to Speaker Nancy Pelosi’s decision to begin an impeachment inquiry to remove him from office.

“There has been no President in the history of our country who has been treated so badly as I have,” he wrote on Twitter

The president noted Democrats had gotten nothing done since taking the House majority and electing Rep. Nancy Pelosi as Speaker.

“The Democrats are frozen with hatred and fear,” Trump wrote. “They get nothing done.”

He noted the level of investigations and criticism targeting him, his family, his businesses, and his administration was unprecedented.

“This should never be allowed to happen to another President,” he wrote. “Witch Hunt!”

Pelosi announced Tuesday she would begin an impeachment inquiry of the president after a whistleblower claimed using secondhand knowledge that the president held an inappropriate call with Ukraine President Volodymyr Zelensky, asking him to investigate former Vice President Joe Biden and his son Hunter Biden for corruption.

News of Trump’s decision to freeze aid to Ukraine before eventually relenting raised accusations from Democrats he was holding it ransom until the Ukrainian government investigated Biden. The president has denied this, promising to release a transcript of the phone call with Zelensky on Wednesday.

“You will see it was a very friendly and totally appropriate call,” he wrote on Twitter.

President Trump is expected to meet with Zelensky on Wednesday, as he continues participation in the United Nations summit in New York City.

Trump also expressed optimism on Tuesday that American voters would see through Pelosi’s effort to impeach him.

“The good news is the voters get it,” he said. “This is why they say it’s good for the election, but you know what? It’s bad for the country, what she’s doing is very bad.” 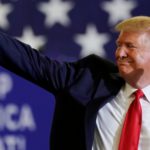 Our Take: Democrats Choose Impeachment Because They Fear Trump