It was hard to find any silver lining or deeper meaning in the Democrats’ press conference yesterday. Their announcement of formal articles of impeachment against President Trump marks a very dark day indeed for our Republic.

But in the more compact context of these impeachment proceedings within the last three months, the actual “charges” betray how much the Democrats have been forced to backtrack on their own claims against President Trump.

Throughout the impeachment hearings, the Democrats claimed President Trump was guilty of a wide variety of so-called “high crimes and misdemeanors.” They claimed that he was guilty of bribery, and extortion, and witness intimidation among others. Yet all three of those were conspicuously absent from Pelosi’s final articles of impeachment, of which there are only two: “Obstruction of Congress” and “abuse of power.” This represents a historically small result for any impeachment proceedings against a president, as past presidents such as Nixon and Clinton faced up to four or five articles of impeachment.

The Democrats know that this impeachment will not succeed. They know that President Trump did nothing wrong. And they know that they are lying. But at this point, like a cornered animal, they just don’t care anymore. 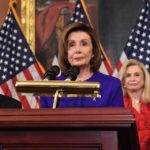 Our Take: Democrats Backtrack on their Own Impeachment Narrative