While President Trump was halfway around the world making history in North Korea, his opponents back in America were doing what they do best: Committing blatant acts of domestic terrorism.

The far-left Anarcho-Communist group Antifa, which has been recognized by some government agencies for the domestic terrorist group that it is, proved that no one is off-limits to them. Whether they’re attacking gay Asian journalists or unarmed old men, they’ve made it clear that they consider anyone to the Right of Karl Marx an enemy.

They do not care if you are old, or a minority, or an unarmed civilian; they will attack you with blunt objects, chemical weapons, and anything they can come up with to carry out their objectives of suppression and intimidation. Antifa are terrorists, and like any other terrorist, they are evil.

But there is one other important fact to remember. While Antifa are directly responsible for criminal acts of violence, they are directly encouraged and supported by their boosters in the Fake News media and the Democratic Party. From Chris Cuomo and Don Lemon, to Keith Ellison and Maxine Waters; Democrat politicians and the media both encourage such violence against anyone they determine to be guilty of “wrongthink,” under the guise of their self-righteous crusade for “social justice.”

The Republican Party have wasted no time in the past condemning far-right elements. As long as the Democrats refuse to condemn the terrorism of Antifa as occurred this weekend, they are guilty for inciting and condoning the bloodshed of the masked thugs in Portland.

Journalist Andy Ngo was assaulted by Antifa protestors in Portland Saturday afternoon, according to video taken of part of the assault and Ngo himself.

The video showed Ngo, editor of Quilette, being punched and kicked by masked assailants dressed in black and then being hit by various containers of liquid as he is retreating.

He later live-streamed a video of himself describing the assault. His face is scratched and he has blood on his neck. A police officer is heard interviewing him on the livestream.

“I just got beat up by the crowd, with no police at all, in the middle of the street,” Ngo said during the livestream.

“Where the hell were all of you,” he is heard asking the police officer. He is also heard saying he was assaulted twice earlier in the day, and reported both incidents to the police with no response.

He said he was hit by milkshakes and hit on the back of his head as well.

Portland Police Department tweeted for protestors to disperse or be subject to arrest or use of force.

Ngo is known for covering the far left and is often targeted by the left for his reporting. The day before the planned protest, he expressed fears of being singled out and assaulted.

Michelle Malkin started a GoFundMe account for Ngo to help him replace his equipment and medical bills. She also provided an update on his condition:

“UPDATE 7:15pm Eastern: Andy is in the ER with a trusted friend. Attackers tore his ear lobe and you can see the injuries he sustained to his face and neck. Please keep sending messages of encouragement with your much appreciated donations to keep his spirits up and let him know how much his journalism matters.”

The Portland Police Department tweeted after the assault that it received information that some of the milkshakes being thrown by protestors contained “quick-drying cement.” 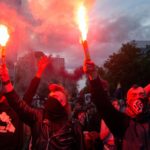 Our Take: Democrats are Complicit in Antifa’s Violence