For some time now, the Green New Deal could best be described as a watermelon of a scheme: Green on the outside with its “environmentally friendly” approach, but deep, deep red on the inside for the socialism and totalitarianism that it would actually necessitate if enacted.

At CNN’s 7-hour climate change-themed town hall, the Democrats turned that watermelon inside out and exposed the red socialist innards for the whole world to see.

As we documented yesterday, there are multiple ways that the Democratic candidates’ proposals to fight “global warming” are simply absurd in theory and dangerous in practice, from regulating what we are allowed to eat to suggesting more abortions in poor countries in order to curb alleged over-population.

But the most important thing to remember above all else is that these policies seek to take complete control of every aspect of your life. Whether they outlaw certain types of straws or dictate what you can and cannot eat, few hypothetical societies would be more tyrannical than a world in which the Green New Deal is law, under a President like Bernie Sanders or Elizabeth Warren.

In the end, the Democrats don’t even care about the climate. If they did, they would be calling out the true pollution culprits, like China. Instead, their true end goal is to take control of the American people with the most invasive and comprehensive means possible.

If they were to succeed, they could create a dictatorial state the likes of which even Stalin could did.

“We all want to, & can, do our part w climate change & environmental justice,” she continued.

“But know that just 3 industries are responsible for 71% of carbon emissions. & if you’re concerned abt money in politics, the fossil fuel industry is a key source of political corruption,” she added.

The clip features Warren fielding a question from Chris Cuomo, who asked, “Do you think that the government should be in the business of telling you what kind of lightbulb you can have?”

“No. Here’s the–  look, there are a lot of ways that we try to change our energy consumption, and our pollution, and God bless all of those ways,” she said before listing off lightbulbs, plastic straw usage, and beef consumption.

“And I get that people are trying to find the part that they can work on and what can they do. And I’m in favor of that. And I’m going to help and I’m going to support,” she continued.

“But understand, this is exactly what the fossil fuel industry hopes we’re all talking about. That’s what they want us to talk about,” the presidential candidate added, referring to action on lightbulbs, plastic straws, and cheeseburgers.

“‘This is your problem.’ They want to be able to stir up a lot of controversy around your lightbulbs, around your straws, and around your cheeseburgers. When 70 percent of the pollution of the carbon that we’re throwing into the air comes from three industries, and we can set our targets and say, by 2028, 2030, and 2035, no more. Think about that. Right there.

Now, the other 30 percent, we still got to work on. Oh, no, we don’t stop at 70 percent. But the point is, that’s where we need to focus. And why don’t we focus there? It’s corruption. It’s these giant corporations that keep hiring the PR firms that — everybody has fun with it, right, gets it all out there — so we don’t look at who’s still making the big bucks off polluting our Earth.

And the time for that has passed. We have a chance, a chance left in 2020 to turn this around, but we are running out of time on this one. So we’ve got to do this in 2020, and that means the first thing we’ve got to do is we’ve got to attack this corruption head on in Washington and say enough of having the oil industry, the fossil fuel industry write all our laws in this area. No more. No more.”

Concerns surrounding big government measures on beef consumption and plastic straw usage have been spurred by remarks made by many of Warren’s fellow contenders and not necessarily driven by the fossil fuel industry.

Sen. Kamala Harris (D-CA) admitted during the CNN town hall that she wants to “encourage innovation” and ultimately ban plastic straws, and many of the remaining candidates – including Andrew Yang (D), Amy Klobuchar (D-MN), and Beto O’Rourke (D) – signaled their openness to address meat consumption on various levels.

Mayor Pete Buttigieg (D) told CNN’s Alisyn Camerota Thursday that people who use plastic straws and eat cheeseburgers are “part of the problem.’

Last week, Sen. Bernie Sanders (I-VT) signaled that he is open to the possibility of a “meat tax.”

Sanders also made waves Wednesday night after confirming that he is willing to address population control.

“Would you be courageous enough to discuss this issue and make it a key feature of a plan to address climate catastrophe?” a town hall attendee asked.

“The answer is yes,” Sanders said, adding that the U.S. must do more to help women across the globe gain access to abortion. 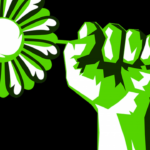 Our Take: Dem Climate Policies? Just a Cover for Their Totalitarianism