Perhaps one of the most stunning aspects of the wave of Deep State stooges emerging to testify against President Trump is the audacity they have displayed, how they expect to be treated with respect solely because they are career bureaucrats.

From former Ukrainian Ambassador Marie Yovanovitch being offended by President Trump firing her, to Lt. Col. Alexander Vindman arrogantly demanding that civilians like Congressman Devin Nunes refer to him by his full military rank, theirs is a self-righteous smugness that thrives in the Swamp, but is rightfully seen as pompous and self-righteous by the average American.

Beyond the usual egocentric attitude common in D.C., these people expect even greater respect specifically because they are violating their oaths of office, breaking their chains of command, and actively trying to impeach a sitting President for doing absolutely nothing wrong. In their minds, President Trump’s defiance of their unelected positions on foreign policy constitutes an impeachable offense.

That is why we must all continue to do the one thing that irritates these people the most: Show them no respect whatsoever. They are not senior officials or brave, decorated veterans; they are elitist hacks and saboteurs deserving of our scorn about all else. 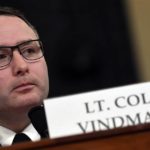