Another year, another successful CPAC. Once more, the largest gathering of conservatives in the United States proved to be not only a fun and wide-ranging experience for all in attendance, but it proved several important things about the current state of the conservative movement.

First, it showed that conservatives are still the side that knows how to have fun, which is a concept that is completely lost on the left. For yet another event that served as a massive “who’s who” of modern conservatism, with some of the biggest names in the Republican Party strolling the halls – from Congressman such as Doug Collins and Lee Zeldin, to Mike Lindell and Stephen Baldwin – everyone had a good time and came together to enjoy four days of engaging, discussing, and advancing conservative principles.

Second, it showed that the conservative movement is truly united like never before. Not only were there Americans of all stripes in attendance – black, brown, and white, men and women, young and old – but Americans from various ideological factions of the Right. As Matt Schlapp said in his speech introducing President Donald J. Trump, this movement now consists of conservatives, nationalists, libertarians, populists, independents, and even some Democrats. Ours, once again, remains a big tent ideological that does not exclude people like the Democrats do. See our AMERICA First interview with Matt for more.

And lastly, it reminded us exactly why this unity is so important: As represented by this year’s theme of “America vs. Socialism,” the threat to our country from socialism is stronger than ever before. We need this unity now if we are going to win again this November, and we are blessed to have President Donald Trump in the White House, as a warrior who will fight for us, fight for freedom, and fight for America. 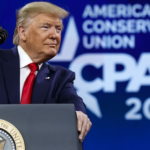 Our Take: CPAC Proves that Conservatives are United