As we broadcast yesterday’s and today’s editions of AMERICA First from the 2020 gathering of the Conservative Political Action Conference (CPAC), there is much to consider about the significance, and the stakes, in this crucial year.

As we discussed in our interview with Matt Schlapp, the theme for this year’s convocation, the largest conservative meeting in the world, is “America vs. Socialism.” As socialist Senator Bernie Sanders appears more likely to become the Democratic Party’s nominee for President, this theme is no longer hypothetical. For as Charlie Kirk said yesterday, there is in fact a real possibility that Sanders could win the election.

There is no greater threat to our freedoms, our republic, and our very national identity than the threat of Socialism, especially when it could here via election and not revolution. As younger generations increasingly lean towards socialism, it is incumbent upon us as conservatives to combat the rising tide of Socialist sentiment with a broad a selection of approaches, from educating the youth to broadening the Republican Party’s tent.

The fate of our nation depends on what we do in the next 8 months, and that message could not be made clearer than at this year’s CPAC. That is why we are gathered here; to fight for the truth, for freedom, and for America. 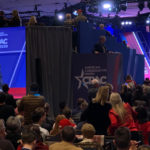 Our Take: CPAC is Right: It’s America vs. Socialism