While the announcement that the Department of Justice has declined to prosecute the corrupt former Director of the FBI James Comey, this news must be seen for what it is: A setback, not the end.

Comey escaping prosecution this time is indeed very reminiscent of Hillary Clinton escaping any legal consequences for her mishandling of Top Secret emails in 2016, for good reason. From the deliberate misappropriation of Classified information to the arrogance at being let off the hook, it is understandable if many are frustrated at this repeated turn of events.

But just as Hillary eventually faced a different kind of justice at the ballot box, so too will Comey most likely get what is coming to him, in due time. Remember that there is still an investigation under way into the origins of the Russian collusion hoax and the illegal spying on the Trump campaign, now known as Obamagate. Attorney General William Barr and U.S. Attorney John Durham are on the case, and will go after anyone and everyone who was involved. This includes Comey.

So, as much as you may have heard this before: We must be patient. The wheels are in motion and justice will come, sooner or later, for all of the culprits in the greatest scandal in American history.

The watchdog office said Comey broke FBI rules by giving a memo containing unclassified information to his friend Daniel Richman with instructions to share the contents with a reporter. The office also said Comey failed to notify the FBI after he was fired that he had retained some of the memos in a safe at home. Comey wrote a series of memos about conversations with President Trump he said unnerved him. Comey has stated he wanted to make a record of the interactions because he was concerned President Trump might later lie about them.

Attorney General William Barr will not prosecute the fired FBI director over his wrongdoings.

In April 2018, Comey turned over seven memos to congressional investigators, and eight of the 15 pages were redacted due to classified exceptions. Comey told the Senate Select Intelligence Committee in June 2017 that he leaked the memos following his May 2017 termination to prompt the appointment of a special counsel. Robert Mueller was later appointed to lead the investigation into now-debunked collusion between the 2016 Trump presidential campaign and Russia.

“I asked a friend of mine to share the content of the memo with a reporter—I thought that might prompt the appointment of a special counsel,” Comey told lawmakers at the time.

“I was worried that the media was camping at the end of my driveway, my wife and I were going away,” he added. “I was worried it would be like feeding seagulls at the beach if it was I who gave it to the media, so I asked my friend to.”

Comey has longed maintained passing the memos to his friend does not constitute leaking classified information.

“I didn’t consider it part of an FBI file,” Comey previously told Fox News Channel host Bret Baier. “It was my personal aide-memoire.”

“I always thought of it as mine,” he added.

Comey claimed vindication in a pair of tweets following the report’s release, saying it “would be nice” for those who “defamed” him to apologize, privately.

“DOJ IG “found no evidence that Comey or his attorneys released any of the classified information contained in any of the memos to members of the media.” I don’t need a public apology from those who defamed me, but a quick message with a “sorry we lied about you” would be nice,” the ousted FBI chief wrote.

“And to all those who’ve spent two years talking about me “going to jail” or being a “liar and a leaker”—ask yourselves why you still trust people who gave you bad info for so long, including the president,” he added.

The watchdog’s report on Comey is separate from a larger report on the DOJ’s handling of the Trump-Russia investigation.

“Today’s report is a disappointing reminder that the former FBI Director put partisanship and personal ambition over patriotism and his legal obligations to the American people. By leaking his confidential communications with the President in an attempt to save face in the wake of his firing, Mr. Comey believed he was above the rules of the DOJ,” Jordan said. “His actions were disgraceful and part of a wider effort within the Obama Justice Department to undermine President Trump. I am grateful that the Inspector General brought these issues to light and look forward to his and Mr. Durham’s findings related to abuses of the FISA process.” 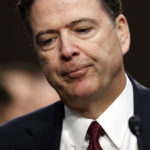 Our Take: Comey is Not Out of the Woods Yet