All of the FAKENEWS media’s focus may be on impeachment, but we must never forget the hundreds of untold battles that are taking place for our culture, all across America. And few settings better represent the state of our culture war than America’s college campuses.

Last night Dr. Gorka addressed Turning Point USA’s 2019 Student Action Summit, featuring over 4,000 young patriots from across the country; it is the largest such gathering of young conservatives of its kind ever. Two of them made guest appearances on yesterday’s broadcast of AMERICA First, telling of their struggles against political correctness and suppression of their views on campus.

As Dr. Gorka noted in his address, there is one thing Ben Shapiro gets wrong about his approach to conservatism. While he has made popular the phrase that “facts don’t care about your feelings,” as Andrew Klavan has noted, the truth is that feelings do matter. And in this culture war, we are not going to win by simply repeating basic talking points and listing off boring numbers and statistics about free-market economics or unemployment figures.

We will only win the culture war by combining that truth with an appeal to emotions, through compassion and love, to show that we are the ones who actually care about our fellow citizens and want to help people, unlike the Left that simply wants more control over your life to engineer a Utopian future that is in fact impossible.

The battle on our college campuses is more important than ever before, as the Left seeks to brainwash millions of young people with their hate-filled ideology. It will be a hard fight, but it is a fight that we can win. If you want to save our Republic, Ground Zero in the war for American culture is our colleges and high schools, and Turning Point USA is on the frontline. People support this incredible organization at this link. 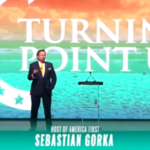 Our Take: College Campuses are Ground Zero for the Culture War