There has been some division on the Right as to whether or not Chris Cuomo should be criticized for his recent foul-mouthed public outburst, or defended for standing up for himself against a heckler.

It is understandable as to why some hold the latter position, even though it’s quite clear that Fredo psychotically over-reacted to his new nickname. At the same time, it must be pointed out that Cuomo has never been shy when it came to similar harassment of conservatives in the past.

Where was Chris Cuomo when Sarah Huckabee Sanders and her family were ejected from a restaurant, just for serving the Trump Administration? Where was Chris Cuomo when thousands were calling for physical harm against innocent Catholic teenagers attending the March for Life? He was either deafeningly silent at best, or complicit at worst. And let us not forget the times that he openly defended the far-left domestic terror group Antifa, calling theirs a “good cause” as they assaulted innocent Trump supporters in the streets.

The fact remains that Chris “Fredo” Cuomo has reaped what he has sown. He and his ilk, through their harmful rhetoric and complicity in violence against the Right, created the environment where public figures have to fear such public harassment in the first place. He and others on the Left assumed that they could continue to live a double-standard, getting away with this kind of talk while their political opponents couldn’t go anywhere in public. But this weekend, Fredo learnt the hard way that he will have to start playing by his own rules when it comes to the decline of civility in political discourse.

And he has no one to blame except himself.

CNN’s Chris Cuomo once again defended the left-wing terrorist group Antifa, this time declaring them a “good cause.”

The far-left Cuomo’s abiding affection for these black-clad, fully masked terrorists and the violence they commit, not just against neo-Nazis, but police officers, journalists, and everyday citizens, reveals a lot about the dangerous radicalism of the basement-rated CNN.

“It’s not about being right in the eyes of the law,” Cuomo said in defense of Antifa, “but you also have to know what’s right and wrong in a moral, in a good and evil sense.”

“That’s why people who show up to fight against bigots are not to be judged the same as the bigots, even if they do resort to the same kinds of petty violence,” he added.

What you have there is a CNN anchor justifying violence against “bigotry” in a world where his fake news network is defining Christians as bigots for opposing gay marriage, Republicans as bigots for not voting for Barack Obama, and 16-year-old boys as bigots for wearing Make America Great Again hats.

In other words, Cuomo and CNN are justifying violence against all of us, everyone to the right of Bernie Sanders.

Cuomo once compared these Antifa terrorists, these modern-day brownshirts who attack police officers and regularly assault journalists, to the American servicemen who stormed the beaches at Normandy.

But-but-but they fight bigotry, Cuomo argues — which is like arguing we need to remember Mussolini kept the trains running on time, Hitler built the autobahn, Mao fought for equality, and Stalin threw good dinner parties…

Now listen to Cuomo attempt to justify mob violence if it’s in service to a “good cause.”

“You can talk about Antifa, I’ve watched them in streets protesting in different situations, OK?” Cuomo argued. “There are certainly aspects of them that are true to a cause, that is a good cause, they want social justice, they want whatever they want in that context.”

Sorry, decent people do not split hairs to excuse, champion, and encourage evil. Decent people remember that every one of history’s monsters, from Hitler to Lenin to Castro to Pol Pot, believed they were fighting a “good cause” — some even believed they were fighting against bigotry and for social justice. So let’s use this opportunity to examine Cuomo’s definition of “social justice.”

Some of you might remember that Fredo’s twisted idea of “social justice” is to expose young girls to a penis without their consent.

And let’s not forget that Cuomo’s warped idea of “social justice” also includes a return to McCarthyism, to a dark era where we blacklist people who express inappropriate ideas.

“Chris, Antifa is not a good cause,” he said. “Antifa does not have good aims, Antifa wants power, wants political power, taken through force. That’s what Antifa is all about.”

Forget all that, though, and ask yourself on what planet does a decent person even attempt to defend a gang of thugs who dress all in black, wear masks, and brandish weapons?

Well, that planet is called CNN.

You see, Antifa is okay with CNN because Antifa are their brownshirts, their terrorists, their violent gang of thugs taking it to we Trumptards who dare to point and laugh at CNN, who dare not recognize CNN’s authority and wisdom.

Here’s some truth: CNN thrills over the “petty” ultra-violence Antifa unleashes against the political right. In the sick and sinister minds that run that Hate Network, Trump supporters got it coming, which is why — and this is important…

Cuomo and his far-left confederates regularly encourage these terrorists.

Cuomo’s not just splitting the Hitler-and-the-autobahn hair to keep the debunked Charlottesville Hoax alive, he is using every opportunity to fire off a dogwhistle, to give his brownshirts a wink of encouragement and a nod of approval.

CNN’s association with, encouragement of, and affection for political violence has been well documented over the years, and as we get closer to the 2020 presidential election, it is only going to get worse… Much worse.

All Cuomo is doing here is prepping a battlefield CNN wants to see bloodied.

P.S. Eighty-nine million who do not watch CNN are subsidizing this hate. Are you one of them? 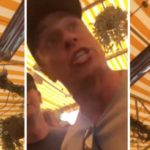 Our Take: CNN’s Chris Cuomo Reaps What he Sows