It should be absolutely no surprise that CNN has just proven how hand-in-hand FakeNews goes with the Deep State. The network’s hiring of disgraced former FBI Deputy Director Andrew McCabe as a contributor is a very clear statement that the headquarters of the FakeNews Industrial Complex values its narrative over the truth.

Never mind that the main reason for McCabe’s firing was his leaking of confidential information to the media. Such dishonesty and illegality means nothing to CNN, when McCabe sufficiently proved his anti-Trump credentials in the process. Nor is the “press outlet” concerned that the entirety of the “Russia” hoax, of which McCabe was an integral part has been thoroughly debunked.

CNN would rather sink with the ship than acknowledge reality. As their ratings continue to plummet, such desperate moves as the hiring of McCabe are nothing more than death throes as the former news network slides further into oblivion.

McCabe was fired by Sessions on March 16, 2018. Since he was fired a day before he could have retired, he will have to wait until he is 57 instead of 50 in order to collect his retirement benefits.

Before his firing, McCabe had been a frequent target of Trump’s criticism. Trump celebrated the firing in a tweet, calling it a “great day for Democracy.”

In April 2018, news broke that the Justice Department’s inspector general issued a criminal referral to the U.S. attorney’s office regarding McCabe. The IG accused McCabe of purposely leaking information to the media in order to “advance his personal interest.” This referral in itself was not legally binding.

In February of this year, the Department of Justice had to issue a formal denial after McCabe went on “CBS This Morning” and claimed that the DOJ had considered whether certain members of Trump’s cabinet would be on board with invoking the 25th Amendment to remove the president from office.

McCabe also published a book this year titled, “The Threat: How the FBI Protects America in the Age of Terror and Trump,” a memoir critical of the administration in general and Sessions in particular.

This announcement comes a day after CNN personalities, including Darcy, criticized Fox News for hiring former White House press secretary Sarah Huckabee Sanders. Darcy said Thursday that this, and Sean Spicer’s inclusion on ABC’s “Dancing with the Stars,” “raises the question: How should former White House officials who misled the public be treated when they seek positions of fame and privilege?” 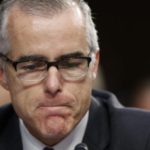 Our Take: CNN Proves its Loyalty to the Deep State