As if the FakeNews Industrial Complex’s defense of out-and-proud anti-Semites and racists like Ilhan Omar wasn’t bad enough, CNN has just jumped the shark.

The hypocrisy could not be more glaring, as the network regularly labels President Trump’s Tweets as “racist,” while turning around and giving a free platform to actual white nationalist Richard Spencer.

On top of giving such a despicable racist a platform, CNN demonstrated the painfully obvious tactics that the “mainstream” media has been using against Trump ever since he first announced his candidacy in 2015. From David Duke to Richard Spencer, the media dredges up bigots from whatever holes they are hiding in, for the sole purpose of perpetuating the myth that President Trump is secretly a racist himself and is actively courting white supremacists.

The fact that this is the first time Spencer’s face has been seen on major media outlets since the Charlottesville rally almost two years ago is telling; the timing is no coincidence. He is a puppet of the legacy media, pulled out of a fetid drawer to do a quick little FakeNews dance on command. His usefulness to the Democrat narrative is exactly why he is still on Twitter to this day, even as other right-wing figures are banned without hesitation.

Never mind the fact that Spencer’s interview on CNN includes his own expressions of disapproval towards Trump – arguing that the President is a fake and hasn’t “purified” America to accomplish white nationalist goals. The notion that legitimate white supremacists don’t support President Trump doesn’t fit the media’s narrative. To CNN, simply the image of Richard Spencer conveys their message, not his actual words. That’s most likely why CNN also conveniently fails to mention that Spencer has disavowed Trump for 2020 and has endorsed several Democrats instead, including Andrew Yang and Tulsi Gabbard.

Beyond a broader statement about CNN’s complete lack of decency and journalistic integrity, this disgusting stunt should also make one point clear: Even despite the FakeNews’ manipulation of reality, the fact remains that actual white supremacists and racists do not support President Trump. And that should tell you all you need to know.

Spencer said Trump was playing a “con game” and his attacks were not racist enough.

“He gives us nothing outside of racist tweets,” he said. “And by racist tweets, I mean tweets that are meaningless and cheap and express the kind of sentiments you might hear from your drunk uncle while he’s watching [Sean] ‘Hannity.'”

Joan Donovan, director of the Technology and Social Change Project at Harvard University’s Shorenstein Center, said CNN did not “understand that Spencer was trying to position Trump as a moderate and to mock other white supremacists who supported Trump.”

“Spencer was saying that Trump was performing racism on Twitter, but that his policies do not go far enough to be considered support for white supremacists goals.”

Splinter reporter Sophie Weiner said the credibility given to Spencer by CNN “and the lack of context with which his comments are presented, is totally mind-boggling. Spencer wants a new Holocaust (a supposedly “peaceful” one) that would drive all non-white people out of the U.S. and create a white ethnostate in its place.”

“As people know, I’m close to a free speech absolutist,” former CNN senior digital producer Steve Krakauer tweeted. “I don’t think Richard Spencer – or anyone, unless they are actively advocating violence – should be banned from Twitter. But you don’t have to give them a platform on a cable news network. And you shouldn’t.” 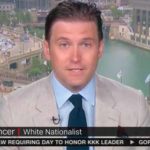 Our Take: CNN Gives a Platform to an Actual White Supremacist