One of the main reasons Donald Trump won the 2016 presidential election is because he vowed to stand with the American people, especially those who are forgotten or marginalized by our political elites.

Over the weekend, CNN couldn’t resist proving just how much they share the so-called elite’s contempt for the average American. As host Don Lemon, anti-Trump “Republican” Rick Wilson, and New York Times leftist Wajahat Ali continued talking about the “quid pro quo” conspiracy theory, they made sure to attack President Trump’s supporters with the kind of blanket labelling and unvarnished contempt that defines the Never Trump crowd.

As they laughed at their own unfunny joke, repeatedly mocking Trump supporters with fake accents and direct insults that the average Trump voter is an uneducated rube, they unapologetically displayed their feelings for the 63 million citizens who elected President Trump.

This proves that the Left has not moved on from Hillary Clinton’s “basket of deplorables” mindset even after four years, and thus have no intention of learning any lesson from when the American people rejected their snobbery and contempt in 2016. Both bodes well for the MAGA Agenda in November 2020. 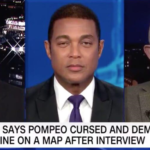 Our Take: CNN Displays its Contempt for America