On Friday, President Trump delivered some swift justice to three of the most nefarious Deep State operatives involved in the attempted impeachment fiasco: Lt. Col. Alexander “Sasha” Vindman and his twin brother Yevgeny, along with EU Ambassador Gordon Sondland, were fired from their posts.

While this is a strong start, there is more that can – and should – be done. Vindman should face charges in front of a military court immediately. There is more than enough legal ground for a UCMJ investigation against him under Article 15 for leaking and under 18 U.S.C. §2384, where he should face a charge of Sedition for opposing “the authority of the United States government.”

Since President Donald Trump is the Commander-in-Chief, Vindman violated his chain of command by attempting to usurp President Trump’s authority, and for the sole purpose of his own personal biases against the President. Vindman specifically said, under oath, that he was testifying against the President because he felt that the President was an “outside influencer promoting a false narrative of Ukraine inconsistent with the consensus views of the interagency.” In this statement, Vindman admits that he was not trying to reveal some heinous crime committed by the President, but rather simply disagreed with the President’s foreign policy, which is not an impeachable offense. An officer in the United States Army does not get to testify against the President in a bogus impeachment hearing without repercussions.

He could also face charges of perjury, specifically pertaining to his testimony regarding the whistleblower. Despite Adam Schiff’s best efforts to cut off Devin Nunes’s questioning along those lines in order to protect his “star witnesses,” Vindman still testified under oath that he did not know the identity of the so-called whistleblower, Eric Ciaramella. If he lied under oath, then he is guilty of another felony outside of the jurisdiction of the United States military. 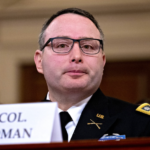