There are few entities less deserving of the Left’s hate than the fast food chain Chick-Fil-A. They, like many other businesses, just want to serve their customers high-quality food, with the added bonus of promoting traditional conservative values.

For this, they have been endlessly boycotted by the Left, particularly on college campuses. They have mostly stood firm against the onslaught, with their millions of loyal customers continuing to show their support and making it one of the most successful fast food chains in the country.

But recently, after years of unending pressure from the far-left, the company finally backed down on one key issue, and announced that they would no longer donate to alleged “anti-LGBT” charities. With all due respect to those at Chick-Fil-A who made the decision, this amounts to nothing more than cultural surrender, and for nothing. And the Left still continues to spew hatred at Chick-Fil-A after the decision was made.

Or, to take another example: The day after the ostensibly conservative Young America’s Foundation fired Michelle Malkin for supposedly supporting white nationalists, they still were faced with a leftist mob that violently shut down a speech by economist Art Laffer. Such deranged extremists could not care less about the extent to which YAF was virtue-signaling against one of their own: They still see the entirety of the organization as “far-right.”

That is why you must never give on anything to today’s Left, because when you do, all that happens is they smell blood and go in for the kill. 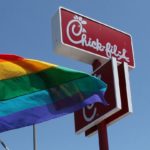 Our Take: Caving to the Left Never Works