Once again, the Left has proven that their rigid guidelines of political correctness are only reserved for their opponents, not themselves.

First it was the corrupt Governor of Virginia, Ralph Northam, the Butcher of Richmond, who appeared in blackface alongside another individual dressed as a KKK member in his college yearbook. Despite the widespread backlash, Northam refused to resign. And wasn’t made to by his party.

Now the same scenario is being repeated in Canada, featuring the equally “liberal” and politically correct Prime Minister, Justin Trudeau. It has been revealed that at a school party many years ago, back when he was a teacher, he wore something even more embarrassing than his duck socks: “Brownface” makeup, at an “Arabian Nights”-themed party, as he groped one of the students.

As with Northam, this has resulted in one of the figureheads of the modern Left – Who incessantly preaches “tolerance” and “sensitivity” – being outed as guilty of the very offenses that they are so quick to condemn their opposition for.

It’s one thing to be racially insensitive, but it’s something else entirely to be a proven and demonstrable hypocrite on the subject of race. For this reason alone, Justin Trudeau should do the decent thing and resign. But don’t hold your breath. In the meantime, be sure to label him a racist.

American Greatness: Justin Trudeau ‘Pissed Off’ at Himself over Blackface Scandal

Canadian Prime Minister Justin Trudeau has found himself at the center of another highly-publicized “blackface” scandal, admitting to wearing a variant of the racial makeup known as “brownface” at a party in 2001, as per the New York Post.

The Canadian prime minister admitted further that the incident in 2001, where he wore brownface and a turban for an “Arabian Nights”-themed party, was not the first time he had done so. Trudeau admitted to reporters that he had also worn blackface “at a talent show” while he was in high school, where he “sang ‘Day-O’ with makeup on.”

Saying that he “didn’t think it was racist at the time,” Trudeau said that “now I recognize it was racist,” and added that he was “disappointed in myself” and “pissed off at myself.”

Trudeau’s is the latest high-profile example of a politician admitting to having worn blackface in the past. Virginia Governor Ralph Northam (D-Va.) was alleged to have worn blackface in a college yearbook photo in 1984, as he posed next to someone dressed as a member of the Ku Klux Klan. He was asked to resign but ultimately refused to do so. 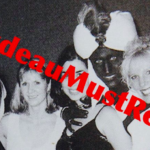