The historic presidency of Donald J. Trump is part of a larger, global movement that is far greater than any of us could imagine. In every other major election, in countries from Europe, to South America, to southeast Asia, nationalist and populist figures are rising up to directly take on the political establishment…and are winning resoundingly.

Prior to the election of President Trump, the first truly seismic indicator of this shift in global politics was the 2016 Brexit referendum, where 52% of the British people voted to leave the European Union. But despite this clear and resounding verdict from the people, the political elite refused to admit defeat. For the past three years since that historic vote, politicians from both the Conservative and Labour parties have tried to foil Brexit, producing delay after delay, and bad deal after bad deal.

The mainstream media is trying to spin Brexit as a disaster for the United Kingdom, even falsely claiming that there is now widespread regret among the British people, who have supposedly changed their minds and now want to remain in the E.U. after all. But make no mistake; as the surging poll numbers of Nigel Farage’s Brexit Party prove, the British people want their 2016 vote to be honored with withdrawal from the E.U.

This is the proof that the global movement for nationalism and populism is alive and well. Even after the passage of three years, with endless obstruction by terrified elites and constant demonization by the “mainstream” media, the voters are still standing behind their cause of national sovereignty, with Farage boldly leading the charge. Just as President Trump remains steadfast in the face of endless witch-hunts, and his voters remain behind him, patriots of all stripes and in all countries remain undeterred.

Spending time in the United Kingdom alongside Nigel Farage and his band of Brexiteers, the Human Events editorial team is pleased to offer its official endorsement to the Brexit Party for the European Parliamentary Election campaign of 2019.

Farage, true to historic form, has displayed unsurpassed levels of energy and excitement on behalf of his own team and elicited the same from the general public over the past five and a half weeks. In other words as long as the Brexit Party has been going.

Originally skeptical of change, UK Independence Party (UKIP) voters have moved over to Farage’s new vehicle – the Brexit Party – in droves in recent weeks, proving a potential eliminatory force for Britain’s governing Conservative Party, and indeed for the old UKIP, currently polling at a negligible three per cent.

But for Farage, the campaign is never over. There can never be enough selfies taken, nor hands shaken, as the Brexit leader proved when he took to the streets of Kent – England’s Garden county – on Wednesday.

No stranger to grassroots campaigning, Farage took to being back on the streets like a fish in water. The honking of the car horns was plentiful as we cruised down the A2 road from Dartford to Gravesend.

“Give us a beep for Brexit!” hollered Farage from the open-top’s tannoy system.

The refrain was too familiar. I had spent this same time on buses with Farage in 2014, 2015, and 2016. And what had it amounted to but repeated monumental betrayal from the governing parties of England?

Well, this time it was different.

No longer fighting a backwards or losing battle, the former UKIP turned Brexit Party leader told the political establishment there would be “no more Mr. Nice Guy” if Brexit was not delivered by March 29th.

But there is Mr. Nice Guy. In fact there’s a very Mr. Nice Farage about the Brexit Party leader who once again looks enthralled by the chance of saving the nation from the Brexit quagmire created by Prime Minister Theresa May.

Despite being “milkshaked”, despite the BBC’s Andrew Marr show, and despite the conspiracy theories touted by the establishment media over Brexit Party funding, Farage is about to come out on top –- again.

A victory – i.e. the highest percentage vote share and seats gained in the European Parliament on Thursday – will cement Farage’s already formidable place in history.

The former metals trader already set records in 2014 as the first non-major party to win a national election in one hundred years, but he’s about to do it again, and with a second party: another record in and of itself.

The entire Brexit Party team, from chairman Richard Tice, to the party’s candidates, to its pollsters, strategists, press officers, and logistics managers are owed a debt of gratitude by Britain’s Brexiteers.

What the institutional Labour and Conservative parties have failed to do in over 20 years, Farage and his loyal team have done: change politics for good.

Change politics for good is now the official slogan and mantra of the Brexit Party.

The theme was drummed up by the party’s leading thinkers, including Farage himself, and polling impresario Chris Bruni-Lowe.

There hasn’t been any real excitement in British politics since Tony Blair led the “Cool Britannia” revolution in 1997, and even so, that energy was quickly traded off for electoral convenience and progressive ideology. Blairism died long ago in Britain, but little stepped in to replace it.

So the nation has hobbled on, effectively in mourning, and without a cause to rally around.

While the political classes love to chunter on about how Farage is a “protest vote”, or how the people of Britain “have never had it so good”, this European Parliamentary campaign represents something far bigger.

First off, this is a second referendum in all but name.

The first nation-wide election since 2017, the European Parliamentary elections afford real insight into where the British public stands on Brexit. The Liberal Democrats insist there is “Bregret” (Brexit regret) across the nation, but this is simply not borne out by any public polling.

Currently, the Brexit Party (the clue’s in the name) polls first nationally in the United Kingdom.

It has made major headway into the working class Labour heartlands, especially those in Wales who have suffered under a devolved Labour government for years.

Secondly, the European Parliamentary campaign is proof of concept for Farage for a more mammoth task: a general election.

Having made virtue of not proposing a manifesto in 2019, the Brexit Party is likely to do the same again come a national, general vote.

“Are you asking me to lie?” Farage responded, when asked about fielding a full manifesto in the near future.

His comments echo those of long-serving Conservative Party activist and Member of Parliament Ann Widdecombe, who told a crowd of 3000+ Brexit supporters on Tuesday night: “…people say to us, why haven’t we got a manifesto? What is the point of having manifestos when you abandon them at the first inconvenience?”

Manifesto or not, the Brexit Party is far better equipped to kill off the political establishment as Britain knows it than anyone else.

A vote for UKIP, For Britain, or other small Eurosceptic candidates would be wasted in the knowledge that the Brexit Party can put a team together in the European Parliament, it can be a part of a Europe-wide group under Farage, and it can help to deliver the biggest priority of the British public at this critical moment.

That’s why we at Human Events, fresh off the campaign trail with Farage and his Brexit Party, give our full endorsement to Nigel and his team for Thursday’s elections.

It is as simple as that. 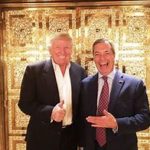 Our Take: Brexit and the European Union Elections