Former Congressman Robert Francis “Beto” O’Rourke has taken the Democrats’ already-far-left platform to a whole new level. Now he enthusiastically and unapologetically says “hell yes” to wanting to take away all of your guns.

The Democrats are not even trying to hide it anymore; they want to take all of your freedoms, one by one.

Mediaite: Beto O’Rourke Goes Off on Gun Control at Debate: ‘Hell Yes, We’re Going to Take Your AR-15, Your AK-47!’

Beto was asked if he supported confiscating guns, which he said he did, qualifying “if it’s a weapon that was designed to kill people on a battlefield.”

“If the high-impact, high-velocity round, when it hits your body, shreds everything inside of your body because it was designed to do that so you would bleed to death on a battlefield and not be able to get up and kill one of our soldiers,” he said.

O’Rourke then shared a harrowing story about the shooting in Odessa.

“I met the mother of a 15-year-old girl who was shot by an AR-15 and that mother watched her bleed to death over the course of an hour because so many other people were shot by that AR-15 in Odessa, there weren’t enough ambulances to get to them in time,” she said.

“Hell yes, we’re going to take your AR-15, your AK-47!” O’Rourke said. “We’re not going to allow it to be used against a fellow American anymore.”

Before moderators moved on, O’Rourke also stressed his plan was supported by Americans he met in red states.

“Folks who said, I would give that up, cut it to pieces, I don’t need this weapon to hunt, to defend myself. It is a weapon of war, so, let’s do the right thing, but let’s bring everyone in America into the conversation,” he said. 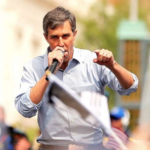 Our Take: Beto Wants Your Guns