There are hardly any words that can do justice to President Trump’s 2020 State of the Union address. The speech was powerful, heart-warming, and above all else, as patriotic as it could be.

On policy, President Trump hit all of the high notes he needed to as he listed his accomplishments and how America has been made even greater during his presidency: From the roaring economy, low unemployment, and decline in the number of Americans on welfare, to his crackdown on illegal immigration, and his masterful foreign policy of strengthening our allies and standing up to our enemies, President Trump proved that his platform is one of American greatness and unlimited success.

The President also held nothing back with the tear-jerking personal anecdotes. He introduced a 13-year-old who dreams of joining the Space Force, who was sitting next to his 100-year-old great-grandfather, a former Tuskegee Airman. He reunited a military family, and paid tribute to fallen warriors. The great Rush Limbaugh was awarded the Presidential Medal of Freedom by First Lady Melania Trump. And, in a powerful rebuke of socialism and tyranny, the legitimate president of Venezuela, Juan Guaido, was in attendance.

And above all else, one truth was clearer than everything else: President Trump was triumphant. Even in the midst of the Democrats’ most egregious and anti-constitutional crusade against him yet – the dying impeachment fiasco – President Trump is unwavering in his determination to Make America Great Again. Every single thing he said in his speech is true, and the impotent Democrats are all the more enraged by the fact that America is back. 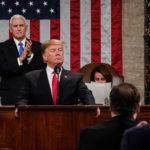 Our Take: Best State of the Union. Ever.