Over the course of one week, a remarkable contrast was presented by two very different political marches held in Washington D.C.

One was the notoriously far-left and anti-Trump event known as the “Women’s March.” Based on a vitriolic hatred of President Trump and his truly conservative policies, the march held its fourth annual event on January 18th. But, in a far cry from its first march in 2017 with about half a million attendees, the 2020 march had no more than a few thousand.

By contrast, the other march, held on January 24th, was the 47th annual March for Life. The pro-life rally that has been held for nearly half a century has shown no signs of slowing down, in terms of attendance and enthusiasm. In addition to regularly boasting hundreds of thousands of attendees, the 2020 March for Life also featured a historic first: The first-ever in-person address by a sitting U.S. President: Donald J. Trump.

The message is clear: While the anti-Trump movement is failing in every way possible, the pro-Trump movement and the conservative agenda is stronger than ever before. This is not a mere fluke, but is indicative of a trend that, if it continues, will only guarantee a stronger America, and – God willing – another four successful years of President Trump. 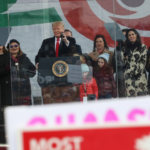 Our Take: As the Women’s March Falls, the March for Life Rises