As the FakeNews Industrial Complex continues to embolden the socialists like Alexandria Ocasio-Cortez, it should come as no surprise when Democrat politicians become less afraid of lying directly to the American people, in the face of the facts.

Of course, no sensible American believed AOC’s initial claims on Twitter that Border Patrol agents were “physically and sexually threatening” towards her, or that they ordered detained illegal aliens to “drink from a toilet.” This is America, not Venezuela.

And it didn’t take long for the truth to come out. Witnesses have claimed that not only was it AOC who was shouting at and threatening law enforcement officials, but she refused to even tour the Border Patrol facility when offered. It has since been further proven that the “toilet” story was based on an immigrant who didn’t know how to operate the water faucet, and thus drank out of a toilet as a last resort, without being ordered to do so.

The President of the National Border Patrol Council, Brandon Judd, is 100% right in calling for an investigation into AOC’s libelous lies. While she explicitly lies about the treatment of migrants to serve her own political purposes, the men and women of the Border Patrol regularly risk their lives to save immigrants in danger.

There are few things more vile than attacking our law enforcement officials with vicious and politically-motivated attacks. In order to send a clear message, and to dissuade any future leftists from trying to spread similar propaganda, the socialist barista must face the legal consequences for her actions. As our friend Joe DiGenova has explained, because the congresswoman told such explicit lies outside of the halls of Congress, she is now liable for the negative effects that her statements may have on the Border Patrol and its agents, and thus could very well face libel charges, as she should.

Rep. Alexandria Ocasio-Cortez, D-N.Y., screamed at federal law enforcement agents “in a threatening manner” during a visit to a Border Patrol facility in El Paso, Texas, and refused to tour the facility, according to two people who witnessed the incident.

A group of 14 House Democrats, including Ocasio-Cortez, and their aides kicked off their visit to the region at about 11 a.m. MST Monday at the El Paso Station on Hondo Pass Drive.

The group was standing inside the station near an area where migrants are held when Ocasio-Cortez left them to sit inside a nearby holding area with a family as the other lawmakers and aides were briefed on station operations.

“She comes out screaming at our agents, right at the beginning [of the tour] … Crying and screaming and yelling,” said one witness who said he was stunned by the outburst in front of approximately 40 people.

“The agents, they wanted to respond, but they held back because she’s a congressional delegate. But when you have someone yelling at you in a threatening manner … ” the same person said. “They were like, ‘Hey, you need to kinda step back.’”

A second official said she went in and out of the cell during the group’s briefing nearby and returned to the group several times to share information she had learned from detainees, including that one person had drunk from a toilet.

The congresswoman told the group she would not go with the 13 other House Democrats on the tour of the facility and stayed with the family.

A second official said that while she was around agents, Ocasio-Cortez commented at another point about an unofficial Border Patrol Facebook page that was exposed earlier Monday for offensive content about those in custody and lawmakers, including the congresswoman.

“Something under her breath, ‘Oh, all these guys in here are gonna f–k me.’ The agents are standing there behind the computers. One of the agents laughed at something he was saying to another agent, and she got irate and flipped out,” the second Border Patrol official said. “Now they’re under investigation for it. She took it as they were laughing at her and screams at them and says, ‘What’s so funny?’”

CBP did not immediately respond to a request for comment on the internal affairs matter. The Border Patrol official said managers were in the process of taking statements from agents.

The Washington Examiner submitted a Freedom of Information Act (FOIA) request to CBP for video of the events.

The congresswoman, who led a charge in 2018 to abolish Immigration and Customs Enforcement, recounted the scene differently in a social media post afterward and did not mention yelling at agents.

“After I forced myself into a cell w/ women&began speaking to them, one of them described their treatment at the hands of officers as “psychological warfare” – waking them at odd hours for no reason, calling them wh*res, etc. Tell me what about that is due to a ‘lack of funding?’” she wrote on Twitter.

“Now I’ve seen the inside of these facilities. It’s not just the kids. It’s everyone. People drinking out of toilets, officers laughing in front of members Congress. I brought it up to their superiors. They said ‘officers are under stress & act out sometimes.’ No accountability,” she tweeted. “Just left the 1st CBP facility. I see why CBP officers were being so physically &sexually threatening towards me. Officers were keeping women in cells w/ no water & had told them to drink out of the toilets. This was them on their GOOD behavior in front of members of Congress.”

The agent on scene said the congresswoman misrepresented why a person in custody had drunk from a toilet.

“So this is what happened with the migrant and drinking water from toilet: she wanted water, didn’t know how to use the faucet in the cell, and drank from the toilet. She never told AOC that we made her drink from the toilet. AOC, of course, changed it … This was when she [the migrant] was apprehended and brought into the facility,” according to the agent.

A Border Patrol official familiar with the sector’s media and congressional visits said the city’s congresswoman, Veronica Escobar, has been through stations “15 times” but did not respond in the same way as her colleague on Monday. Later in the visit, the first official said Escobar “yelled” at El Paso Chief Patrol Agent Aaron Hull about its care of detainees.

“We’ve never hidden anything from her,” the official said. 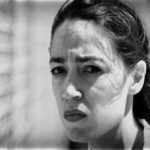 Our Take: AOC is a Total Liar