It is truly a disheartening thing to see so many American citizens, plenty over the age of 18, unapologetically defend an anti-Semite and Holocaust-denier like Nicholas J. Fuentes.

There are many possible reasons for why they think this is a reasonable use of their time: They could simply be stuck in that immature phase of desiring to be as “edgy” and provocative as possible, or it could be the “forbidden fruit” allure of following someone who is (rightfully) considered a dangerous individual.

But whatever the reason, those who follow him and espouse his hateful rhetoric represent not only the worst that America has to offer; but indeed, they represent the exact opposite of America stands for. It was Americans who fought to end fascism in Europe, and to liberate the innocent victims of the Holocaust from the death camps across the continent. By showing allegiance to someone who supports this same kind of fascism and denies the Holocaust, they are shamelessly supporting someone who is fundamentally anti-American.

This is a harsh reminder of what freedom of speech can yield in a free society. Yes, such reprehensible individuals are free to deny history and reject facts all they want; but as vile as their statements are, we can – and must – show them that decency and respect for human dignity will always win, and that we can combat their hate speech with our own free speech based on the Truth. 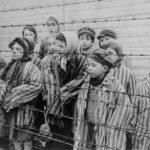 Our Take: Anti-Semites Represent the Opposite of What America Stands For