Not only have the Democrats’ attempts to take down President Trump backfired spectacularly, but their most recent endeavor has only made him even stronger.

As impeachment, their latest attempt to remove him from office, is underway, the President simply responds by continuing to rack up win after win, with some of the most historic achievements of his presidency actually taking place during the impeachment trial.

In the span of just one week, President Trump achieved three historic firsts: He became the first sitting U.S. President to attend the March for Life, signifying his loyalty and support for the pro-life movement. Next he unveiled his historic peace plan for the Israeli-Palestinian conflict, which is the first of its kind to include a path two the proposed two-state solution. Then, just yesterday, he signed into law the United States-Mexico-Canada Agreement, which replaces the disastrous NAFTA with a trade deal that benefits American workers and boosts our economy. An agreement that the Democrats have delayed for a year.

If any other president were achieving these milestones, the Democrats would not care nearly as much. But because it is Donald Trump, someone who is not a swampdwelling politician, they believe that they must try everything in their power to stop him. But this only makes his accomplishments all the more historic, and proves his unwavering resilience as he continues to fight for the American people. 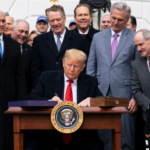 Our Take: Amidst Impeachment, an Historic Week for President Trump