The 2020 election is just around the corner, but it is already clear that President Trump has built such a successful legacy that his name will endure long after he leaves office.

In a recent Axios poll, two of the top four most popular Republican candidates for the 2024 election were Donald Trump Jr. in second place, and Ivanka Trump in fourth place. Two of the President’s children surpassed current senators and governors in their popularity among Republican voters, and this fact only further proves how popular the “Trump brand” truly is.

This should come as no surprise, with President Trump having delivered the most successful economy in our history, destroying our enemies around the world and bringing respect back to America, securing better trade deals, and strengthening our border, among many other historic achievements. It is a testament to how much Americans want to see this continue, that they are even prepared to cast their ballots for the President’s children just to guarantee another four, or eight, years of the same success.

As General Mike Flynn described it, the 2016 election was about “peaceful political revolution,” with Donald Trump leading the charge. The upcoming 2020 election will be about proving that this revolution was not merely a fluke, but representative of a permanent shift away from a corrupt political “elite” and back to government that truly represents the American people. And the 2024 election will be about securing the legacy of that revolution, so as to ensure that America enters a new age of prosperity and security, the likes of which perhaps only a President with the last name Trump can provide. 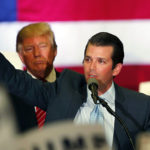 Our Take: Americans Want the Trump Legacy to Continue