The fact that virtually the entire D.C. swamp seems united against President Trump’s decision to withdraw our troops from Syria is all the proof you need that the Commander-in-Chief is making the right decision.

At the center of it all, President Trump is not only fulfilling a core campaign promise to end such pointless and hopeless foreign entanglements, but he is also proving a much broader point: that America cannot continue being the world’s police.

There is injustice everywhere in our world today, from the autocrats of the Middle East to the armed conflicts in Africa. While it would be ideal to bring a stop to all bloodshed and spread peace throughout the world live in the real world of what is possible, not perfect. Donald Trump, as a businessman, is looking at everything – including foreign policy – through a pragmatic lens once more.

There are some problems in the world that cannot be solved even by America’s military. By withdrawing and leaving these countries to solve their own problems, we are not only preserving our own resources and sparing American lives, but we are also encouraging other countries to take care of themselves first, just as we are now putting America First.

Why is it always foreigners who manage to unite all the politicians from both parties in Washington?

Illegal aliens — I mean “Dreamers.” Haitian boat people. Olde Europeans. Sudanese. And now the Kurds. It is never support for regular Americans that brings politicians from both parties together.

Even military veterans seem to offend half the politicians in Washington. Democrats in Congress would give illegal aliens free health care before they would give it to our wounded veterans.

And don’t get me wrong. I’ve got nothing against the Kurds. They seem like great people. Brave, hardworking — a considerable step up from your average American college student today. And they seem to be truly trying to shake off the yoke of tyranny, which at least half of Americans support.

But why do politicians drop everything they should be working on and come together to do something only for the “Dreamers,” who, again, are illegal aliens? Or for the Kurds?

Politico website, in an attempt at wry humor, posted a story Monday: “Trump unites the GOP — against him.”

Get it? So witty.

The story is about how President Trump wants to keep his campaign promise to disentangle us from all these foreign wars, including the civil war in Syria.

Nothing — and I mean NOTHING — unites politicians in Washington like some rogue renegade who gets elected and then vows to keep the promises that got him elected. It is why Mr. Trump is so deeply despised inside the swamp.

The “whistleblowers” in the deepest bowels of the swamp breed like mosquitoes carrying virulent diseases.

“The president’s decision to change course in Syria has united Republicans against him, and it threatens a new round of Congress-versus-the-administration griping with consequences on the global stage,” Politico displayed on its little website.

The electronic story went on to quote Democrats and Republicans drafting bipartisan legislation together — a feat they have not done for regular Americans in years. Probably more than a decade.

They cannot even get together and approve the USMCA trade agreement that everyone in Washington agrees upon and for which thousands of family farmers across the United States are desperate. The holdup is that Mr. Trump might (rightly) get credit for it.

One bill in support of the Kurds has so much support in Congress, politicians claim, that it will be “veto-proof.” Wow. Can you imagine Congress cobbling together that much support for anything to help regular Americans?

Another Republican declared: “We must always have the backs of our allies.”

Where is this unity when it comes to — I don’t know — our own soldiers?

Another Republican wagged his finger: “If the President sticks with this retreat, he needs to know that this bad decision will likely result in the slaughter of allies who fought with us, including women and children.”

This is not our war. It’s theirs. That is why it is called a “civil war.” And it is Syria’s civil war. Not ours. 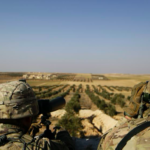 Our Take: America is not the World’s Policeman