You’d be hard-pressed to recall a greater frenzy from the media and the Left in recent memory than the one over Alabama’s new anti-abortion law. From the false claims that women who have abortions will face criminal penalties, to the outrage over the fact that the law does not make exceptions for cases of rape and incest, so many truths and lies alike have been spread that it’s all too easy to forget the bigger picture.

But first, these basic lies must be debunked. The law explicitly says that the women themselves will not be held civilly or criminally liable, only the doctors who perform and provide abortions. Furthermore, the matter of rape and/or incest is not the core issue, since those instances always account for a very small percentage of unwanted pregnancies. Trying to base any public policy on the extremely rare cases is simply irresponsible, because it ignores the majority of the root causes in favor of a sensationalized minority in the greater statistics of abortion. And, as Dr. Gina Loudon said in her most recent appearance on AMERICA First, adding one trauma (abortion) on top of another trauma (rape or incest) only leads to unprecedented rates of suicide and depression among the women who have such an abortion after being raped. And of course, two wrongs do not make a right.

But back to the grand scheme of things, which this article takes care to note. The explicitly-stated intent of the law’s authors is to see Roe v. Wade eventually brought back to the Supreme Court. And Alabama is not a unique case. “Heartbeat bills,” banning abortion after a fetal heartbeat can be detected, have already been passed in Mississippi, Kentucky, Ohio, and Georgia. Similar pro-life legislation is also being considered in Tennessee, Missouri, South Carolina, Florida, Texas, Louisiana and West Virginia.

After over 40 years, the tide is finally turning against the abortion culture in the United States, even despite all the Left’s efforts to entrench it in our society.

The Alabama state Senate on Tuesday approved a bill essentially banning abortion in the state, a move specifically aimed at challenging more than 40 years of federal abortion protection under Roe v. Wade. The bill would make it a felony for a doctor to perform or attempt an abortion during any stage of pregnancy.

Shouting erupted as Democratic Sen. Bobby Singleton, other Democrats and at least one Republican objected to the motion being gaveled through without a roll call vote.

“You’ve got 27 men over on the other side ready to tell women what they can do with their bodies,” Singleton said. “You don’t have to procedurally just try to railroad us.”

The session was adjourned after Senate President Pro Tem Del Marsh, a Republican, suggested the lawmakers take the weekend to cool down.

Singleton put up an amendment to make exceptions in the case of rape and incest again on Tuesday night. Four Republicans joined the seven Democrats present to vote for the exceptions, but the measure failed in a roll call vote. Singleton then accused proponents of the legislation of having “raped the state of Alabama with this bill.”

During Tuesday’s debate on the bill in the Senate, Democratic State Sen. Vivian Figures introduced an amendment to require legislators who voted in favor of the ban to pay the legal fees in the inevitable court challenges, and then another to make vasectomies a felony.

Both of the amendments were rejected by roll call vote.

The bill easily passed the Senate on a 25-to-6 vote. It now goes to Gov. Kay Ivey, a Republican, who has not indicated whether she will sign it. If she does, it would be the strictest abortion law in the country.

Sen. Doug Jones, D-Ala., called the bill an “extreme attack” on women’s freedoms in a video statement posted to his Twitter Monday.

“These are Republican legislators who are overwhelmingly men, are so extreme and so callous that they would support a bill that denies a woman a constitutional right that they’ve had for decades,” Jones said. “They would take that right and make their doctors and health care providers criminals.”

With the new conservative majority on the Supreme Court, lawmakers across the country are pushing for tougher abortion laws to challenge the high court’s 1973 Roe v. Wade ruling.

Alabama House Rep. Terri Collins, who sponsored the bill, told NBC News Tuesday evening that legislators wanted to keep the bill’s text as clean as possible, specifically to address the language in Roe v. Wade, which talked about a baby being “in utero.”

“This bill’s purpose is to hopefully get to the Supreme Court and have them revisit the actual decision, which was, is the baby in a womb a person?” Collins said. “And we believe technology and science shows that it is. You can see that baby tissue develop all the way through now.” 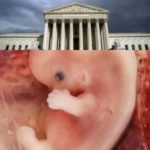