Adam Schiff seems to be in a perpetual race against himself to see how often he can outdo each of his previous lies, one at a time. From his unsubstantiated claim that he had proof of collusion between Russia and President Trump, to his most recent lie about not having any prior contact with the alleged “whistleblower,” Schiff seems to tell a lie every single time he opens his mouth.

Breitbart: I Should Have Been ‘Much More Clear’ About Whistleblower Contact

On Sunday’s broadcast of CBS’s “Face the Nation,” House Intelligence Committee chairman Rep. Adam Schiff (D-CA) said he should have been “much more clear” about the contact his committee had with the whistleblower who triggered the impeachment inquiry into President Donald Trump.

BRENNAN: You know who was on that July 25th call? You know all the participants?

SCHIFF: I can’t say that I do. But we now know what took place on that call. We are bringing in witnesses this coming week from the National Security Council, other State Department officials, to find out what they can tell us about the conditionality of this vital military assistance to an ally. The conditionality of this vital meeting between the two presidents and the president’s effort to dig up dirt on his opponent.

BRENNAN: Quickly, do you regret saying that we, the committee, weren’t in touch with the whistleblower? 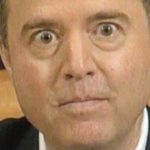 Our Take: Adam Schiff is a Liar