Just 10 days into the new year, and already President Trump has started off strong.

2020 started off with heightened tensions with Iran after Iranian-backed militias attempted to attack our embassy in Baghdad. But the attack was repelled after President Trump called in a swift Marine Corps response to defend the Americans who were in mortal danger. The United States then responded by taking out the Iranian general behind the attack, Qasem Soleimani, with a surgical strike, and after Iran attempted to retaliate with an airstrike on a U.S. airbase in Iraq with no American casualties, the hostile nation backed down, and President Trump emerged victorious.

On the domestic front, the MAGA agenda scored a major victory, when an appeals court lifted a lower court’s block on the Trump Administration’s right to use $3.6 billion of Department of Defense spending to build the border wall. This marked yet another unsuccessful attempt by the Left and activist Obama judges to stop the President from accomplishing his signature goal of building the wall, with construction continuing as planned.

And as Nancy Pelosi continues to deliberately obstruct and delay the process of impeachment, Republicans in the Senate have doubled down in defense of President Trump against this sham of an impeachment. After Senator Josh Hawley of Missouri introduced a measure to dismiss the charges against President Trump outright, Senate Majority Leader Mitch McConnell signed on as a co-sponsor of Senator Hawley’s resolution. And this came after McConnell announced that he had enough Republican votes to fully control who is called as a witness in the Senate trial.

If this is the record of just the first 10 days of 2020, then the election year already looks very bright for Team MAGA. And if that turns out to be the case, then President Trump will be all but guaranteed another four years in the White House, and America will be guaranteed four more years of winning. 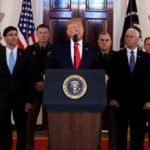 Our Take: 2020 Has Started Off with Multiple Victories