Do you sometimes feel like you are living in a Tim Burton movie?

Or an episode of “Monty Python’s Flying Circus”?

It’s hard not to.

When an evening TV show host starts to tear up live on camera after she is forced admit that the Mueller report confirms that the president is not an agent of a foreign adversary, you have to ask: what is going on in America?

All the more so after a private Twitter user, who posted a video of the teary-eyed Rachel Maddow, was suspended by the social media platform. Why? Because she posted the close-up that clearly demonstrated that Maddow was overwrought. Suspended for posting the truth.

Or look instead at Anderson Cooper, CNN’s putative doyen, who can’t even garner 0.3 percent of the population as viewers for his “flagship” program, and who recently accused Jared Kushner of “gaslighting” the nation over Russia; in other words of making statements aimed at convincing the listeners that they are insane.

This from the network that has so stoked the flames of Russia conspiracy-mongering every day for two years, that they publish outlandish pieces on Robert Mueller’s sealing indictments against the president, and as Cooper’s fellow show host Chris Cuomo qualifies the president’s public statements as those made by a convict already wearing an “orange jumpsuit,” statements that are less gaslighting than full on tinfoil-hattery.

And why was Kushner so calumniated? What craziness was he trying to sell to America as fact? His “gaslighting” sin was to state early last week that the Mueller investigation and the rest of the related farrago had done more damage to our republic and democratic practices than the original illegal actions of Russian actors on Facebook. Yet, ironically, Kushner was lambasted all over the corporate leftist media as the majority of Americans actually agreed with the president’s senior advisor.

Of a dozen issues polled by Gallup, from immigration reform and healthcare to the environment and U.S. foreign policy, Russia’s meddling in our elections came in dead last among the concerns of the American people. Americans really do not see this as a serious threat, so they do not care. Or they see this and not a serious issue in comparison to, say, the crisis at the border.

The rational majority of Americans want to move on. To concentrate on important and real things. But we cannot move on as though nothing of significance has happened here. We must not.

This week, I was privileged to meet with my old boss, President Trump, for a mostly on-the-record meeting—the fruit of which will be part of my new book, The War for America’s Soul. During our discussion I reminded him how in the summer of 2017, when I was still serving as his strategist, we were alone in the Oval Office when out of blue he said to me: “They will find nothing, Sebastian, because there is nothing!”

Since then, the 45th President has been cleared twice by Congress, by a House and a Senate investigation, and now most recently by the $35 million Mueller report. There never was any collusion, as he has told me almost two years ago, and he can’t be charged for obstructing justice most obviously because, without an original predicated crime, there is nothing he logically could have obstructed from being uncovered.

But the reason we cannot simply “move on” is not because there are not better things for the president to worry about but because now we know that there is something about which all Americans should be gravely concerned.

It would be impossible to detail in this one article all of the things the Obama Administration did to subvert the Trump campaign through the use of the intelligence community (IC) for political ends. Moreover, we are only just beginning to chronicle of the depth and breadth of the corruption involved.

To date, the best and bravest analysis has been provided by a handful of writers and investigative journalists. They include Sara Carter, John Solomon, Catherine Herridge, Lee Smith, Julie Kelly, Gregg Jarrett, Kimberly Strassel, Chuck Ross, and Dan Bongino, with Bongino’s book Spygate: The Attempted Sabotage of Donald J. Trump being the most comprehensive work available on the scandal, and this video lecture being the best public summary.

Nevertheless, these are the key facts:

The CIA, the FBI, the Justice Department, and the Obama White House were all involved in a series of codename operations (including “Crossfire Hurricane”) that involved foreign governments, (Australia, Great Britain, and Italy), and their intelligence agencies, including the British equivalent of the National Security Agency, GCHQ, in targeted espionage against members of the Trump campaign.

At the same time, the FBI deployed multiple human assets with the brief to penetrate the Trump campaign and incite actual conspiracy with external Russian actors, a mission they failed to accomplish.

After the election in which Hillary Clinton lost to the rank outsider, Admiral Mike Rogers, the then-director of the NSA, warned President-elect Trump of these illegal and seditious operations without informing the outgoing president, or his immediate superior, Director of National Intelligence James Clapper.

But it didn’t stop there. The illegal espionage operations continued beyond the inauguration and were combined with a massive disinformation and cover-up operation run out of the Department of Justice.

After successfully convincing the new attorney general, Jeff Sessions, with a spurious argument that he had to recuse himself from all matters Russia, Obama Administration holdover Rod Rosenstein made Robert Mueller special counsel, ostensibly to investigate the new commander-in-chief, but simultaneously in charge of making sure that the true crimes of the previous two years were never uncovered.

And none of the above addresses the potentially even broader conspiracy under which the identities of hundreds Americans were compromised through the politically motivated unmasking of their names as they were caught up “accidentally” and “incidentally” in signals intelligence intercepts. By combining a truly unprecedented number of unmasking requests with the two-jump surveillance rule initiated by the Obama Administration, it is hard to imagine any politically active individual in America whose life couldn’t be laid bare at any point with no actual national security justification.

Then there is the most disturbing news of all.

It has been brought to my attention by a former CIA station chief of some prominence and who has a legendary reputation inside the community of pre-Brennan operators, that Hillary Clinton’s loss did not curtail the worst activities of the outgoing Obama team. In fact, through the use of a walled-off team of contractors working inside the Intelligence Community, and for political realms alone, with no FISA-authorization or other national security justification, the Trump White House was spied upon after the January 20 inauguration. (Those responsible for this on-going crime are known to more than one investigative journalist and I have been told that the first of the new revelations will be published in the coming week).

Simply put: the Obama Administration used the most powerful intelligence capabilities in the world to attempt a penetration and subversion of the presidential campaign of the the opposing party. When that failed, they used a special prosecutor to divert attention away from that activity, log-jam the work of the new president, and clean up the evidence of what had been done to him and his team. And most un-American of all: the former intelligence leadership of the Obama Administration continued to spy illegally on Donald Trump and his closest advisers after they had moved into the White House.

Many take offense at the way President Trump uses language, at his tweets and at what they see as his hyperbole. But this week when he called the operations against him and the will of the people who chose him, a “coup” and an “attempted overthrow” of the government, he was making a simple statement of fact. One that will soon make Watergate an irrelevance.

For more insightful conservative commentary, be sure to check out American Greatness. 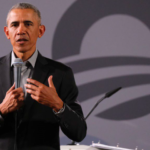 ObamaGate: No Misdemeanors, Only High Crimes